Oppo’s premium lineup of smartphones under the Reno series has recently been updated to include the Oppo Reno 6 and the Oppo Reno 6 Pro in India. We’ve already reviewed the latter and were quite impressed by the phone’s overall performance and its striking design. The focus for its younger sibling, the Oppo Reno 6, also seems to be heavily surrounding design and performance as well. Priced at Rs 29,990, this mid-ranger offers a gamut of appealing specifications and features, looking very impressive, on paper, at least. With that being said, it’s time to put the Oppo Reno6 5G through its paces and give you our take on the phone’s performance, camera, battery, and more.

The Oppo Reno 6 5G is the first phone to sport the MediaTek Dimensity 900 chipset in India, a new 5G SoC for mid-rangers. At the heart of the chip, you have two ARM Cortex-A78 cores clocked at 2.4GHz and six ARM Cortex-A55 cores clocked at 2GHz. As for the graphics, the chipset comes with a Mali-G68 GPU. This is paired with 8GB of RAM and 128GB of UFS 2.1 storage. The Oppo Reno6 also boasts Oppo’s RAM expansion technology with the support for vRAM or virtual RAM up to 5GB. Unfortunately, there’s no SD card slot in the device, so you cannot expand the storage. 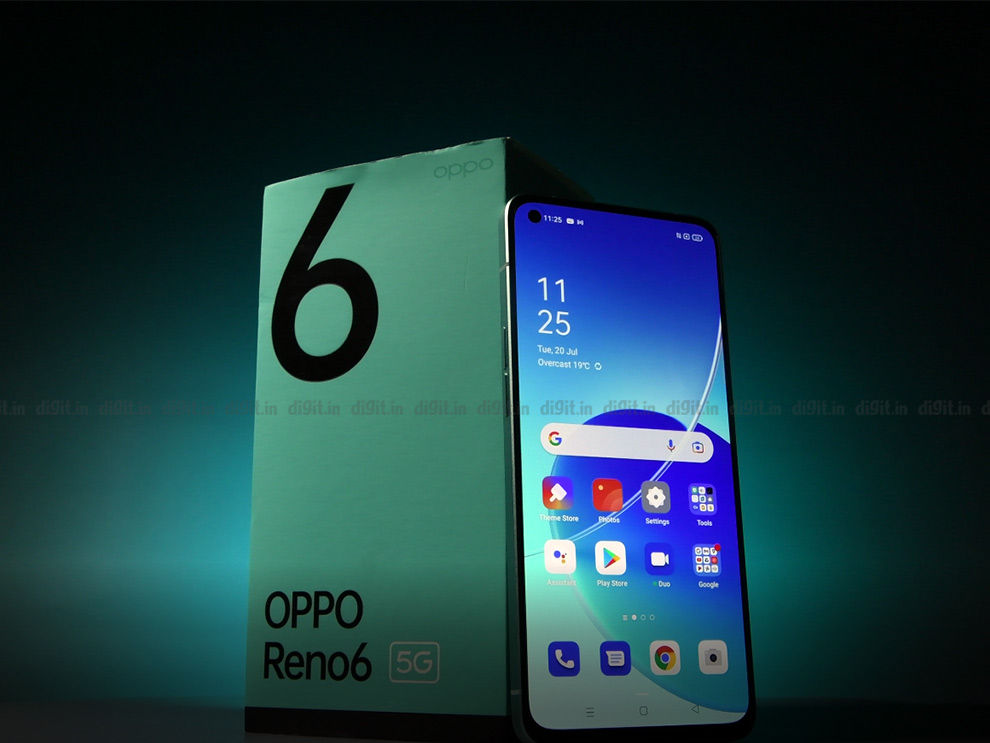 The phone houses a decently sized 4,300mAh battery despite its slim body. It supports Oppo’s 65W SuperVOOC 2.0 fast charging as well. As for the display, the Oppo Reno 6 houses a 6.43-inch flat AMOLED panel with Full HD+ resolution. The display also comes with 90Hz refresh rate and 180Hz touch sampling rate. The display is topped with Gorilla Glass 5 for protection. You also have an under-display optical fingerprint sensor.

For photos and videos, the Oppo Reno 6 packs a triple rear camera stack that includes a 64-megapixel primary lens, an 8-megapixel ultrawide shooter, and a 2-megapixel macro camera. The phone comes with a 32-megapixel selfie camera housed in a punch-hole cutout on the top left corner of the screen for selfies. There are also some interesting features in this department such as Bokeh Flare Portrait Video, AI Highlight Video, and others. Finally, moving on to the software, the Oppo Reno 6 runs Android 11 based on ColorOS 11.3.

Oppo established its design prowess with the Oppo Reno 6 that not only looks but also feels premium. It features Oppo’s patented Reno Glow design that is the fruit of the company’s unique etching technology. The rear panel has a smooth matte finish with an iridescent glow that changes colours as light falls on it. The phone is available in Aurora and Stellar Black colours, we got the former for review which looks absolutely breathtaking. The panel is also fingerprint resistant, which ups the overall appeal of the phone. 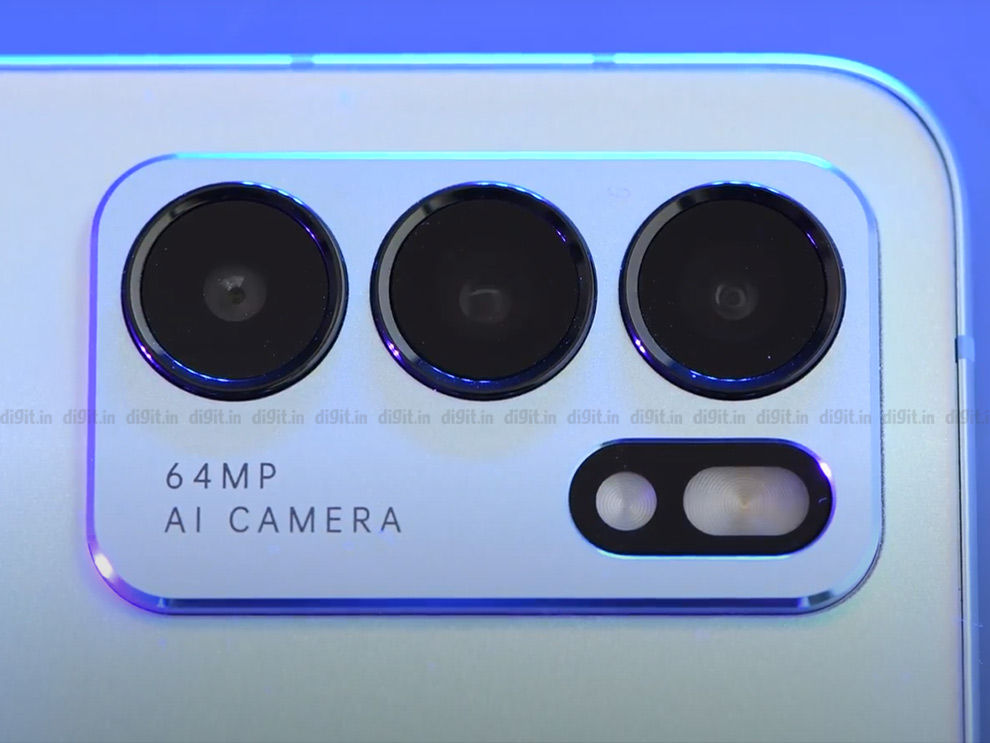 The back also houses the camera stack that protrudes slightly and has the words “64MP AI Camera” etched on it. In contrast to the Pro variant of the device that features rounded edges, the Oppo Reno6 has a flat-edge design that is reminiscent of the iPhone 12 series’ design. Now, this design choice can be polarising to some. The phone didn’t feel as ergonomic to hold to us as ones with a more rounded back, however, not everyone will feel the same way. Additionally, the Oppo Reno 6 is also super lightweight, weighing merely 182g, and sports a thickness of 7.59mm, making it extremely sleek and attractive. The back panel, however, is slightly slippery to hold and we were more confident using it with the provided silicone case. 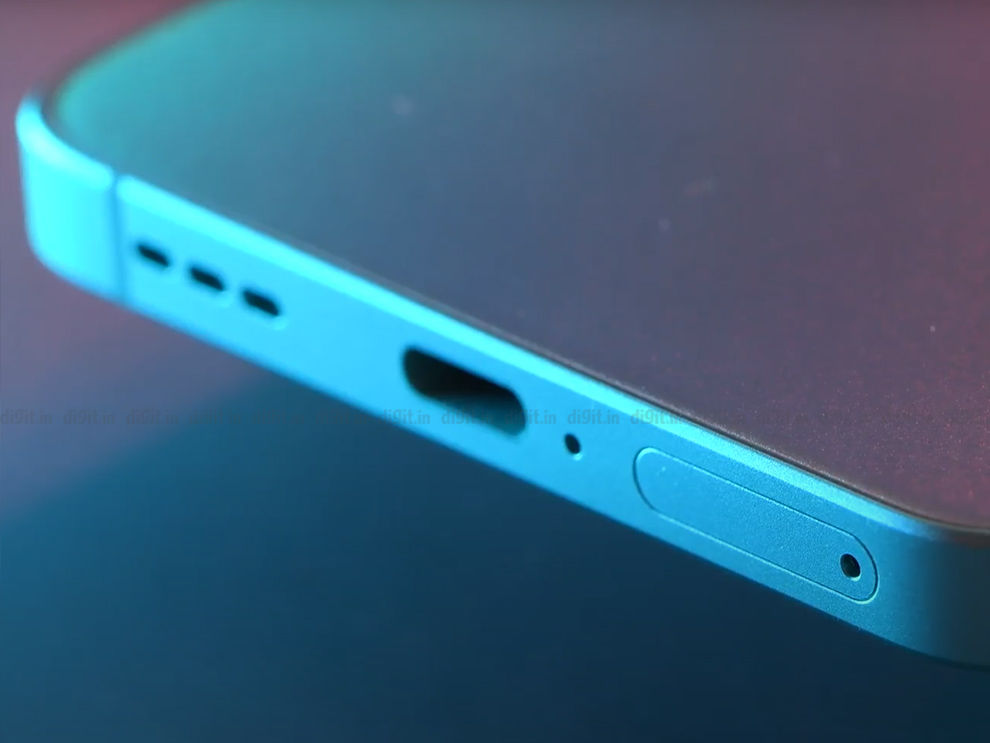 Let’s talk buttons and ports. The Oppo Reno 6 sports the USB-C charging port, a single speaker, and a SIM tray at the bottom of the device. On the right, you have a solitary power button and the left side has the volume rockers. The buttons are tactile and are located in easy to press locations. The phone also features an under-display optical fingerprint sensor. The sensor is moderately speedy and pretty accurate, however, face unlock works considerably faster on this phone. The phone misses out on dual stereo speakers, which is pretty disappointing at this price point, seeing that budget phones such as the Poco M3 have incorporated it. 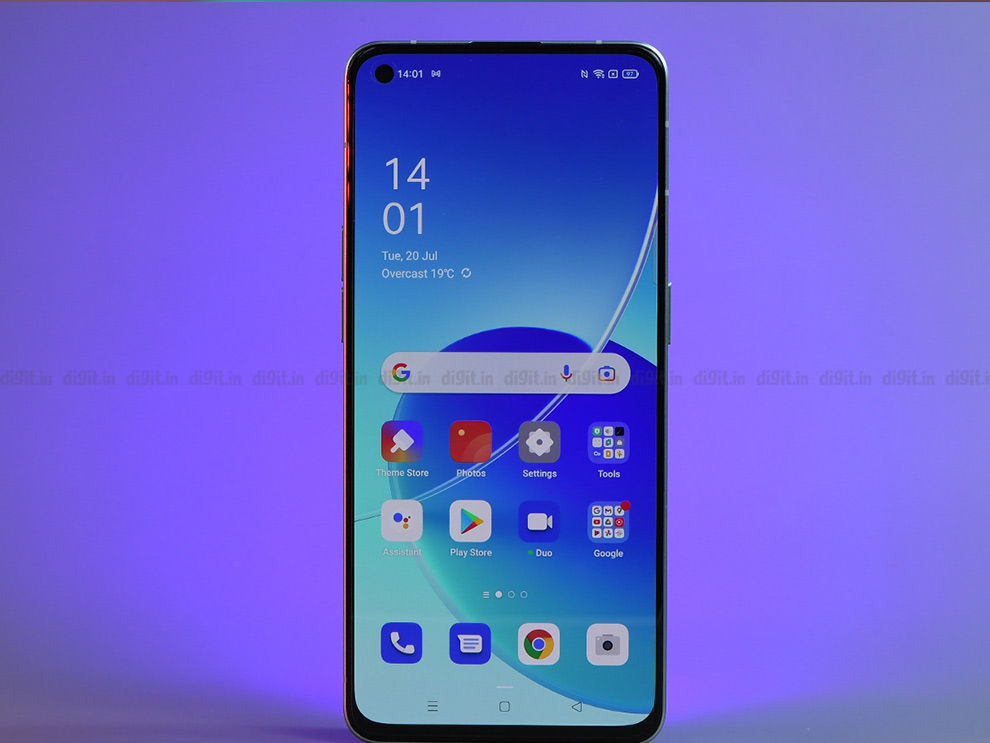 Moving on to the display, the Oppo Reno 6 comes packing a 6.43-inch AMOLED display with Full HD+ resolution and 90Hz refresh rate support. The fast refresh rate ensures smooth scrolling and flicking between apps. Users have the option to toggle down the refresh rate to 60Hz. Unfortunately, there’s no adaptive refresh rate support, which is slightly disappointing at this price since phones that are much more inexpensive have incorporated this nifty feature.

The panel also has a punch-hole cutout for the selfie camera on the top left side of the screen. The display is plenty bright to use indoors or outdoors, even in harsh sunlight, we recorded a max brightness of 620 nits on the screen. It feels premium and has pretty decent colour accuracy as well. The screen also offers good viewing angles and vibrant colours. Additionally, there’s minimal bezel action going on, except for the slightly larger chin bezel.

While Oppo flagships usually tend to lag behind some of its most fierce competitors when it comes to performance, the Oppo Reno 6 has managed to catch up some ground allowing it to become a real competitor in the performance race for mid-rangers. The phone, as we mentioned above, houses the new MediaTek Dimensity 900 SoC and pairs it with 8GB RAM and 128GB storage. The chipset comes with HSR (high-speed rail) mode for gaming that will search and connect to the lowest latency cell tower to minimise ping.

We ran our usual slew of benchmarks to gauge the performance of the device and the results weren’t very convincing. In AnTuTu, the Oppo Reno 6 scored slightly lower than the Snapdragon 768G powered iQOO Z3 5G and considerably lower than the Realme X7 Pro. In GeekBench 5, the Oppo Reno 6 scored 712 in the single-core test and 2113 in the multi-core test. It beat both the iQOO Z3 5G and the OnePlus Nord CE in these tests, however, the Realme X7 Pro still managed to defeat it by a slight margin. 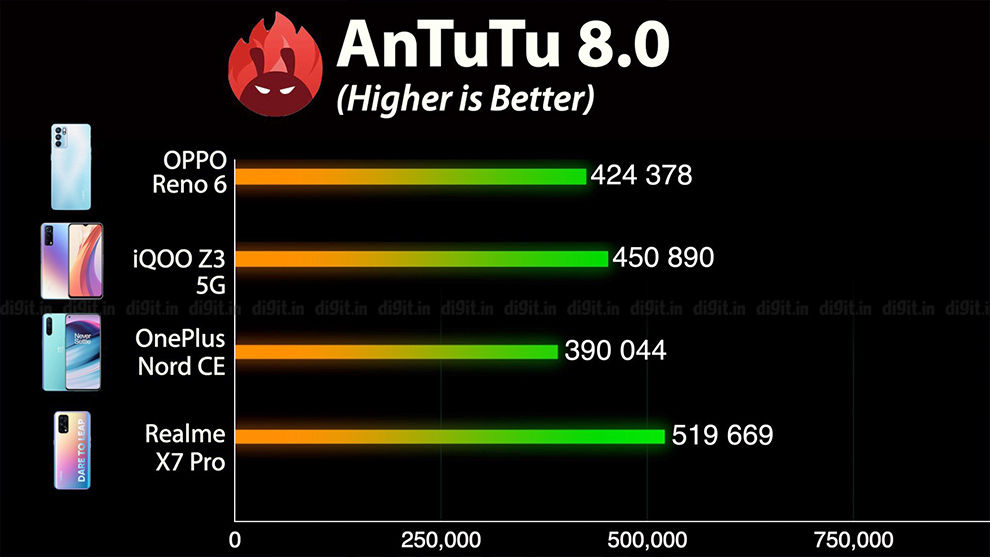 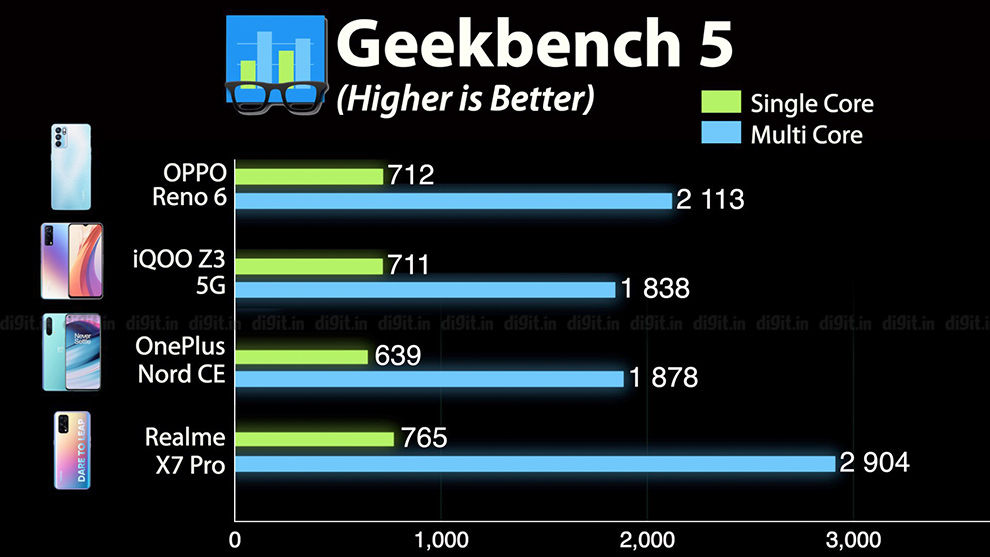 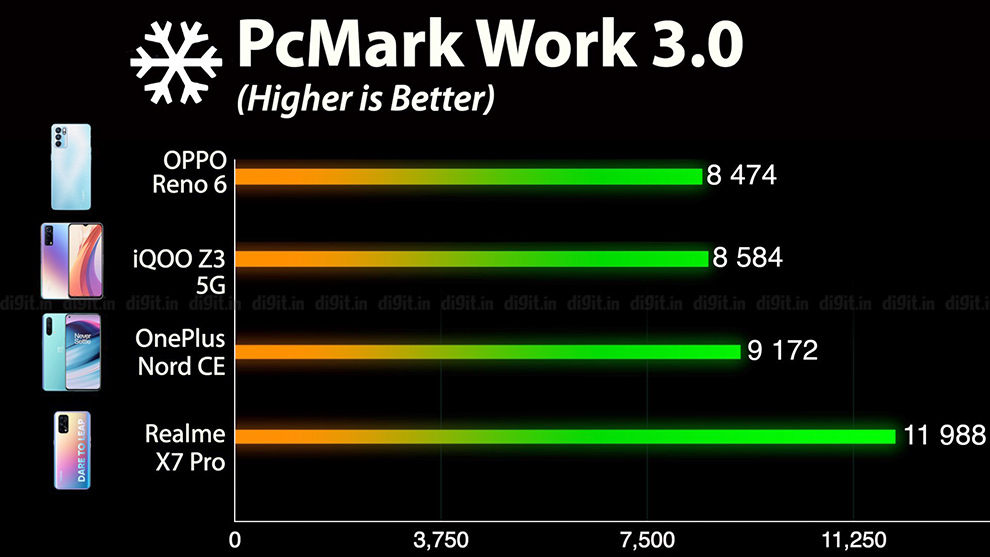 In PCMark Work, the phone scored the lowest out of the lot, with a score of 8474. Moving to GPU performance, the phone scored a respectable 2018 in 3D Mark Wild Life but it lagged behind the Realme Z7 Pro here as well. We tried to test the phone’s gaming performance using Gamebench, but for some reason, Gamebench refused to work on this device. 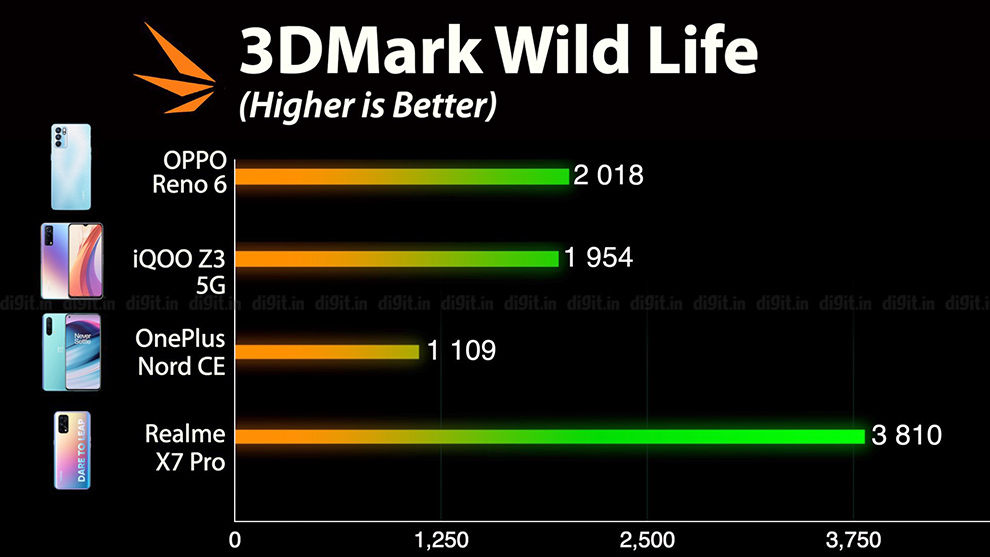 Synthetic benchmarks aside, the Oppo Reno 6 performs admirably well for the most part. You will have no problem whatsoever accomplishing day-to-day tasks such as calling, texting, browsing the web and social media. Thanks to the 8GB of RAM plus the expandable vRAM, the phone is excellent at multitasking as well and is able to keep several apps running without any hitches. The 90Hz refresh rate also makes scrolling and flicking between screens appear smooth.

As for gaming, we played Call of Duty: Mobile and Asphalt 9 Legends to test its gaming chops. The phone performs adequately well when running games with smooth graphics and frame rates. There were occasional hiccups or frame drops during longer gaming sessions, but nothing that’s a dealbreaker. For the most part, the Oppo Reno 6 provides a premium performance experience despite being priced under 30K.

Moving on to the software, the phone runs Android 11 on top of ColorOS 11.3. While ColorOS provides plenty of customisation options and a decent look, it is loaded with bloatware in the form of third party apps. Some Oppo apps cannot be uninstalled as well, so it is not the cleanest experience.

Oppo has the reputation of putting in a lot of extra effort for its phones’ cameras and the Oppo Reno 6 is a good example of that. The phone houses a 64MP primary lens, an 8MP ultrawide shooter, and a 2MP macro sensor. It skips out on the 2MP mono lens that is present on the Pro variant of this device, but this is not a huge miss. 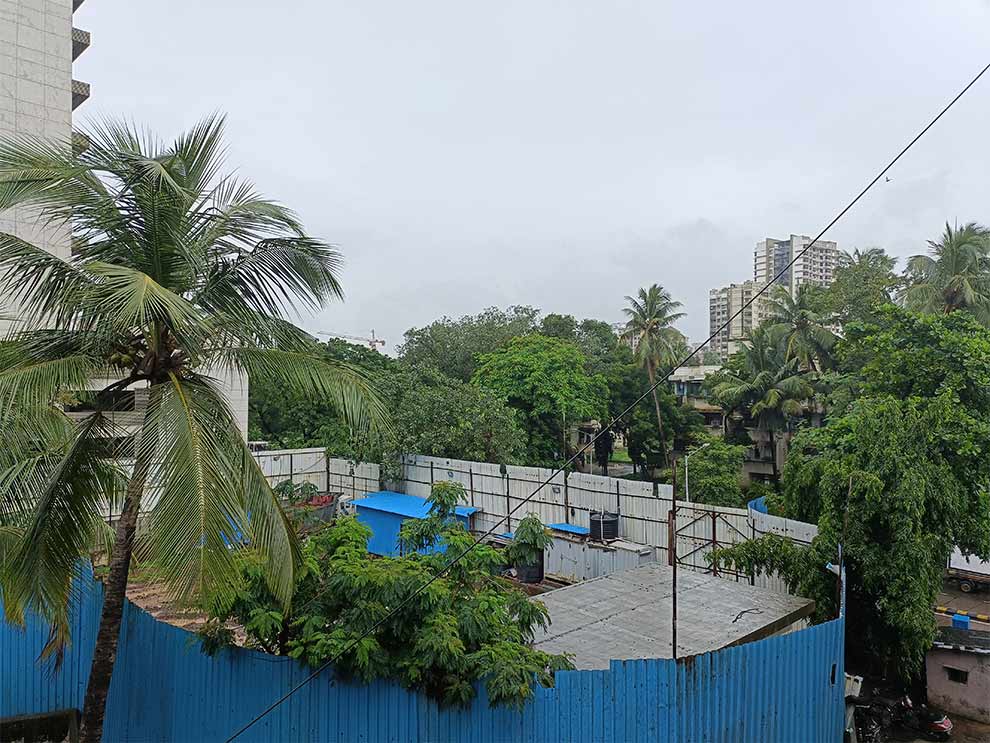 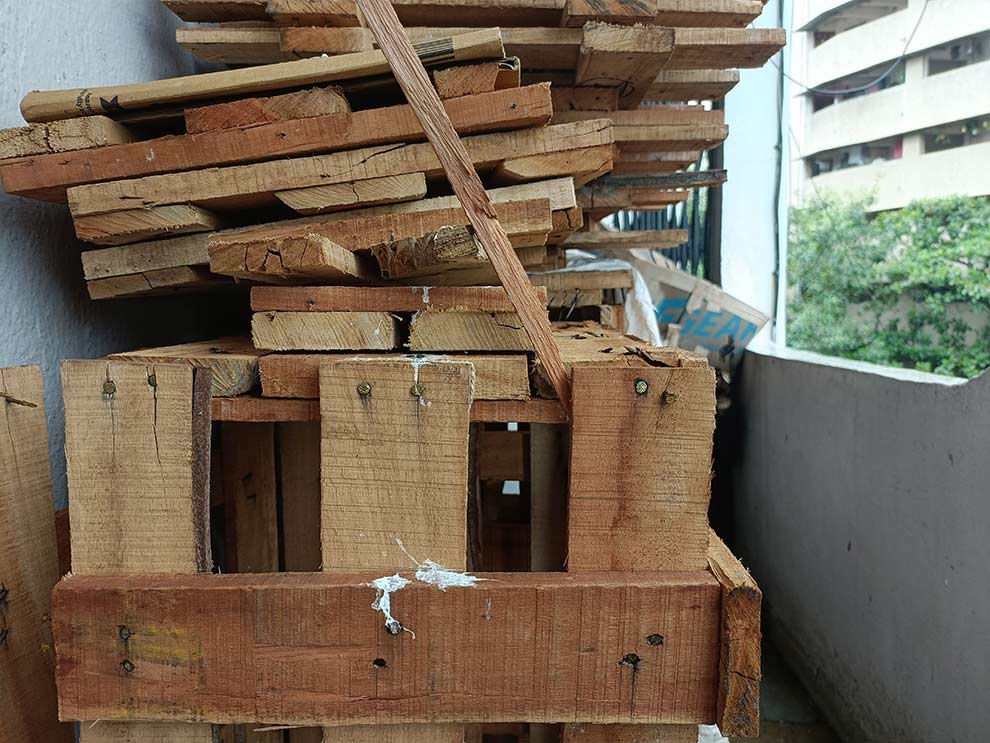 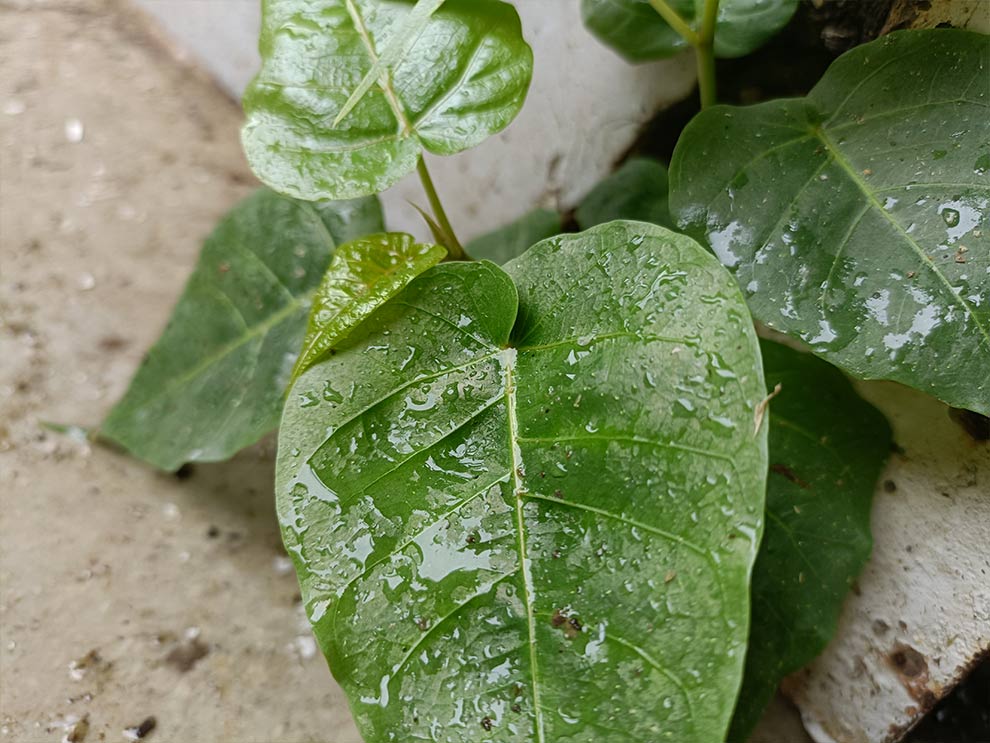 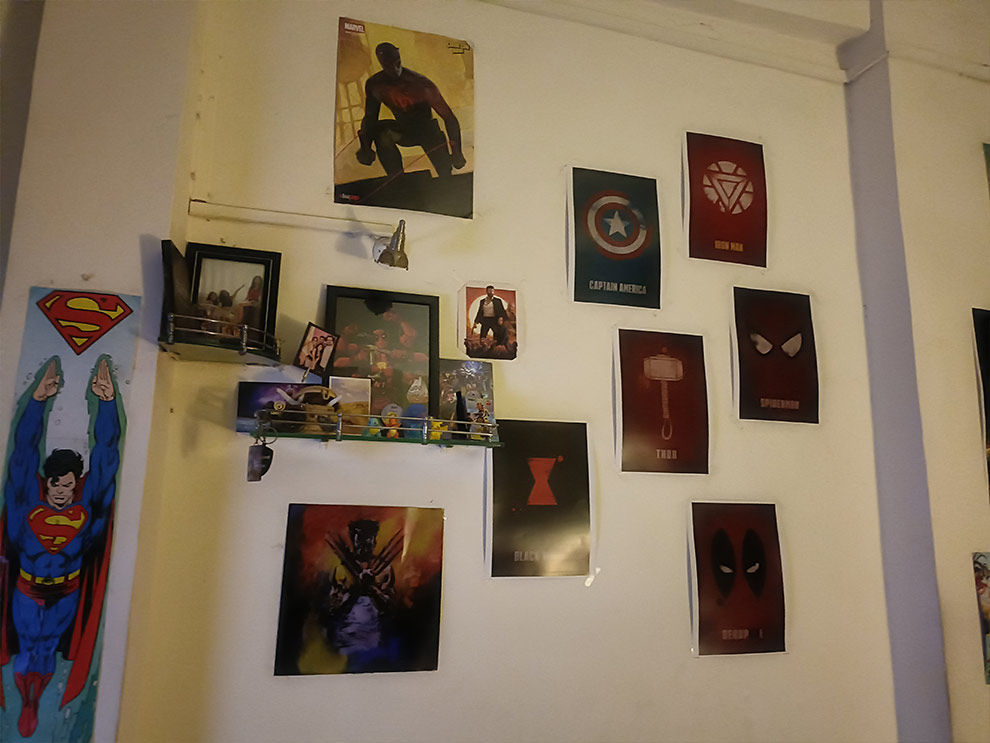 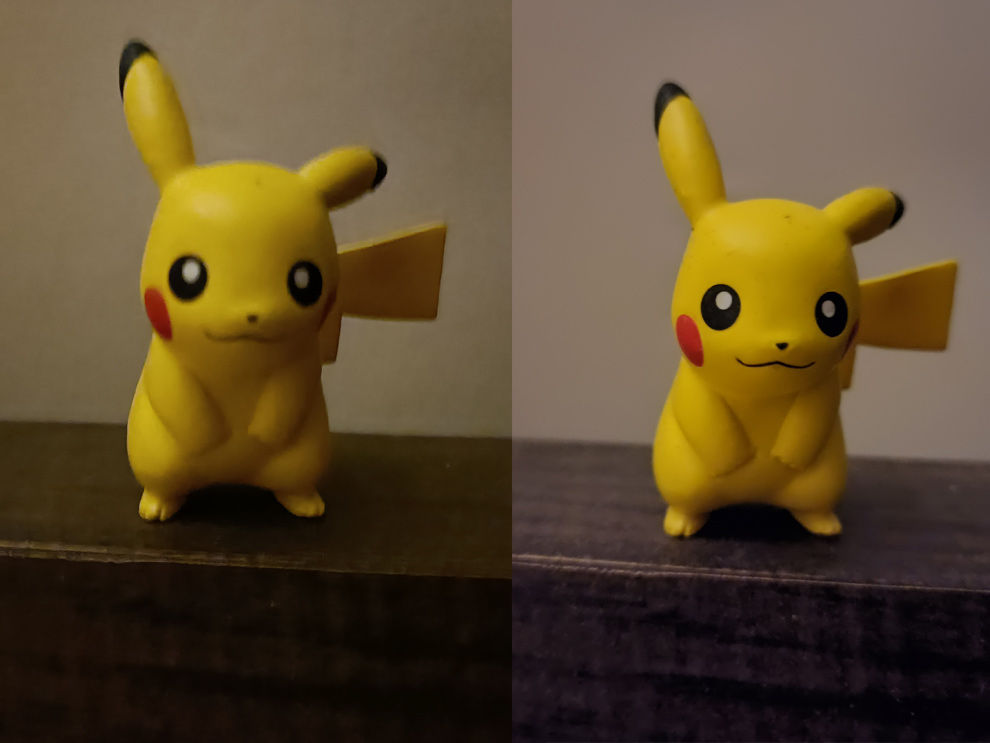 The primary 64MP lens churns out detailed and vibrant shots in daylight with good colours and dynamic range. In low light scenarios, this lens produces decent shots, although they are sometimes plagued with a fair amount of noise and lacklustre colours. Thankfully, the phone’s Night Mode more than makes up for this fault by churning out good low light images with plenty of light, very little noise, and good detail. The phone takes a long time to focus on subjects in low light though. 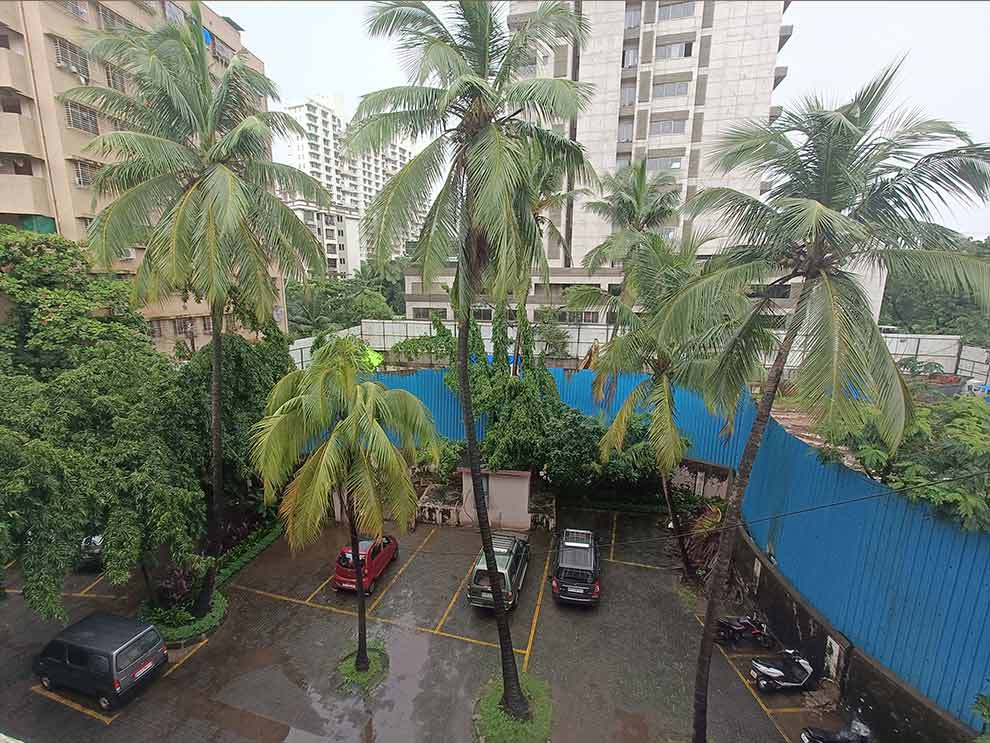 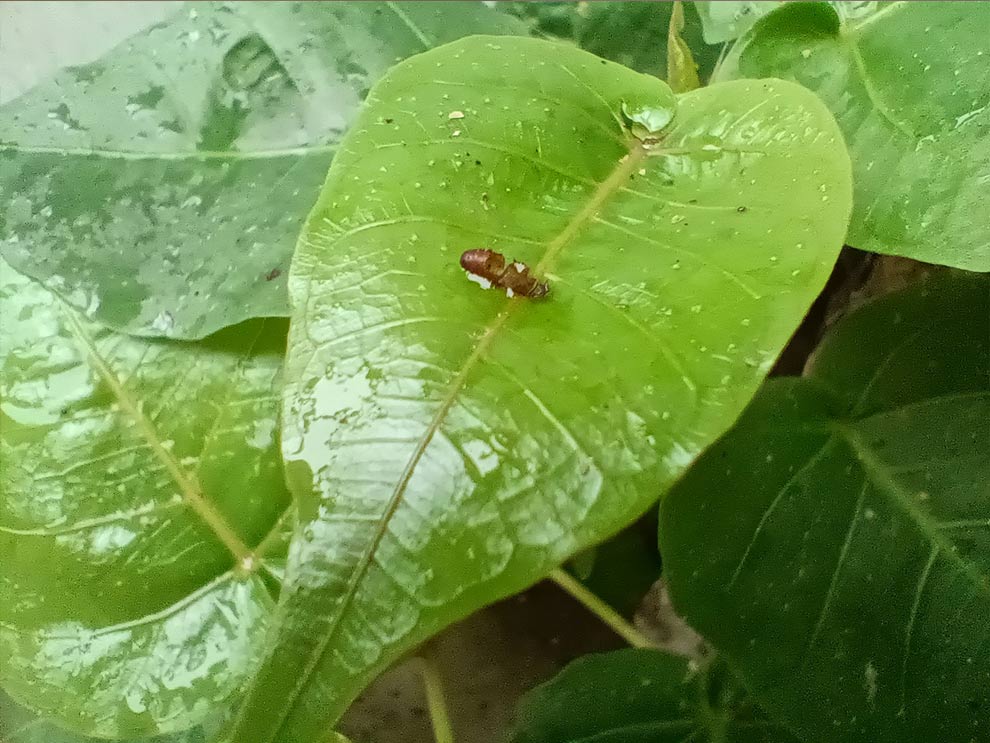 Moving on to the ultrawide lens, the phone captures pretty decent pictures in daylight with good colour, however, the dynamic range is lacking a bit on this lens. There’s very little lens distortion on this 8MP lens though, which is good. You can also shoot Night Mode on the ultrawide lens, but photos lack detail in comparison to the Night Mode shots taken on the primary lens. The 2MP macro lens shoots mediocre shots with decent colour, but the detail is often lacking and the subject isn’t always in focus.

The phone also brings along with it some really interesting video features such as Oppo’s Bokeh Flare video mode that adds cinematic effects in portrait videos. You also have something called AI Color Portrait mode that that makes subjects pop in portrait videos. These options will be appreciated by those who want an elevated videography experience on their device. For normal videography, the phone allows users to shoot 4K videos at 30fps. There’s no stabilisation, so the videos will suffer from shake. Electronic stabilisation kicks in at 1080p recording.

The phone’s 32MP selfie camera offers good detail and colours in most scenarios and even has pretty decent low light performance. However, ensure to turn off the beauty filters when clicking selfies if you prefer a natural look. The beauty filters alter the facial features of people aggressively and are turned on by default.

The Oppo Reno 6 houses a moderately powerful 4,300mAh battery with support for 65W fast charging. While the phone’s battery won’t compete with power champs that sport large 5,000-6,000mAh batteries, it is enough to power through most users through a day of usage. If you’re a power user though who consumes a lot of content on YouTube and OTT platforms and play a lot of intensive mobile games, expect to seek out the charger in the evening or night after charging the device to full in the morning.

In our battery tests, the phone lost 5 per cent of battery life when playing Call of Duty Mobile and lost 7 per cent battery when streaming content on Netflix for half an hour. Despite the phone’s slightly lacklustre battery capacity, Oppo’s 65W fast charging ensures that you can charge the device back up to full in a jiffy. In our tests, the phone’s out of the box 65W charger powered the device back up to full in merely 36 minutes from an empty battery. This is extremely impressive and convenient, especially for those who don’t prefer leaving their phones on charge for long periods of time.

The Oppo Reno 6 stands tall amidst its competition due to its stellar, eye-catching design and good overall performance. While there are plenty of appealing options in this mid-range category of smartphones, the Oppo Reno 6 offers a good blend of looks and performance. If you wish to own a phone that stands out of the crowd under 30K, the Oppo Reno 6 becomes a very obvious recommendation since it not only looks good but also has impressive performance, good cameras, and decent battery life with speedy 65W fast charging support.