The Logitech G Pro X SUPERLIGHT is a great lightweight gaming mouse, with an excellent sensor, great click latency, great build quality, and great overall wireless performance. It’s one of the lightest wireless mice we’ve ever tested, and you can certainly feel the difference between the SUPERLIGHT at the G Pro Wireless. 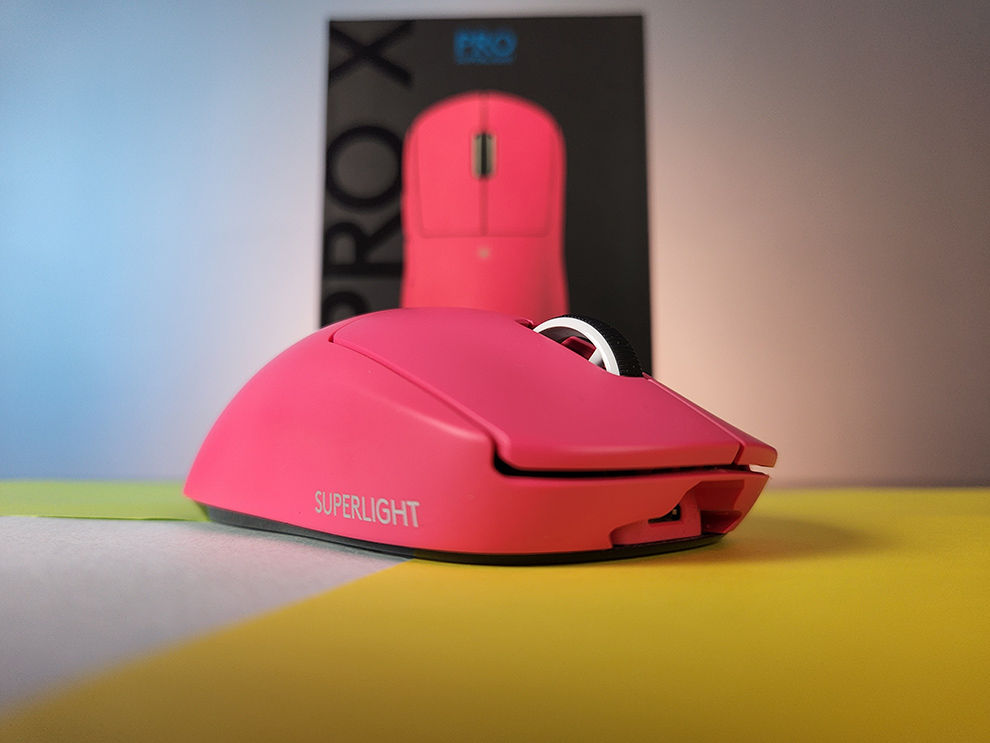 Like we mentioned, the Logitech G Pro X SUPERLIGHT looks pretty much identical to the G Pro Wireless, it even has the same dimensions. However, there are some key differences worth pointing out. For starters, the G Pro X SUPERLIGHT only has two fixed buttons on the left side of the mouse, unlike the G Pro Wireless which could have two detachable buttons on either side. They’ve also done away with the DPI switch button under the G Pro X SUPERLIGHT, and the Logitech G logo lighting on the body of the mouse. Where the light would be, instead you’ve just got a glossy Logitech G logo. There’s only a small indicator light on the body for when the mouse is charging and when you switch DPI via the software. While all of these are technically missing features, they’ve been done with the intention of reducing the weight as much as possible; which they’ve accomplished, bringing the weight down to 61g from the G Pro Wireless’s 80g. The mouse has a standard ratcheting (perstep resistant) plastic scroll wheel with a textured rubberised coating. No side scrolling. 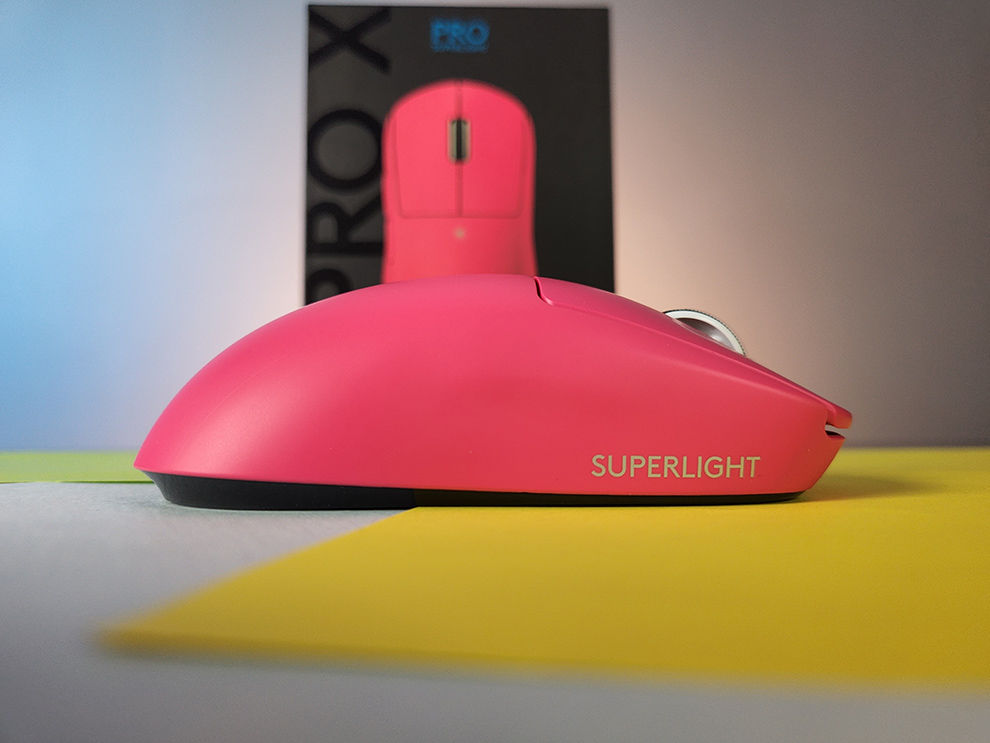 Coming to the build quality, the entire body is made with lightweight, sturdy plastic, with matte finish. There’s flex on the left and right click buttons when they’re pressed down hard, but that’s about it. There’s no loose or jiggling parts and the overall build quality feels very premium. Under the mouse, below the on-off switch, you’ve got a magnetic cap under which you can house the mouse’s USB dongle. Being able to carry the dongle within the mouse itself makes it a lot more convenient when it comes to portability; this is in addition to the mouse already being pretty lightweight. 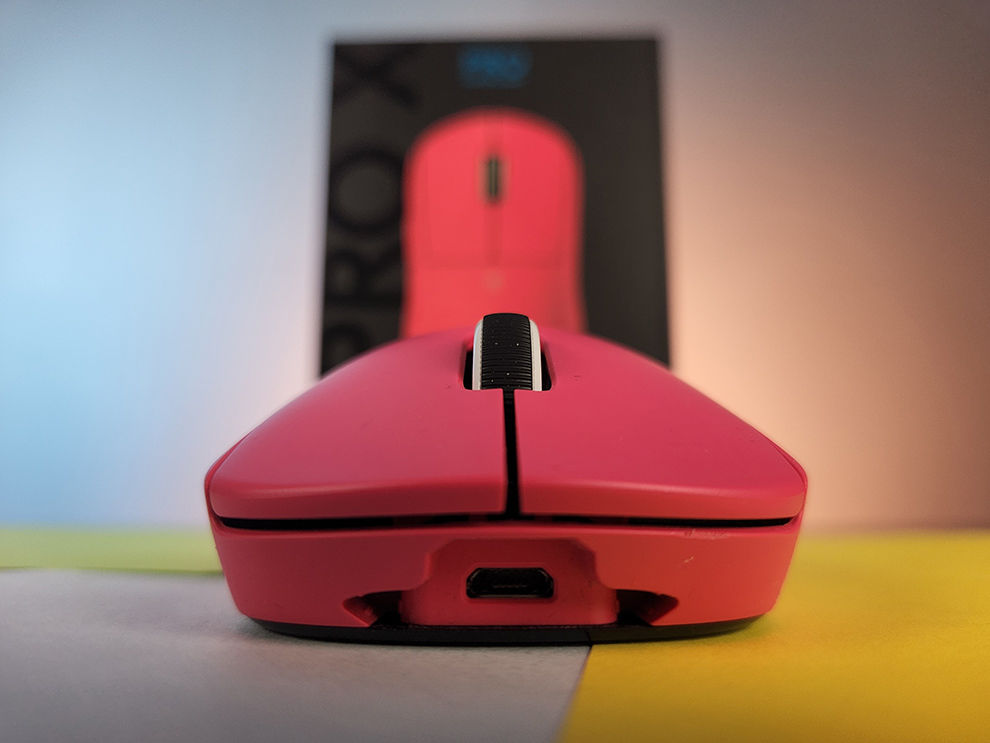 The body can be a bit on the slippery side, but they’ve included side and click grips in the packaging. They’ve also included an additional magnetic cap with PTFE on it for extra glide. Speaking of PTFE feet, the mouse uses virgin-grade PTFE feet which are firmly in place, and show no sign of peeling off even after rigorous testing. You will however, need to forcibly peel them off if you intend to open the mouse up. 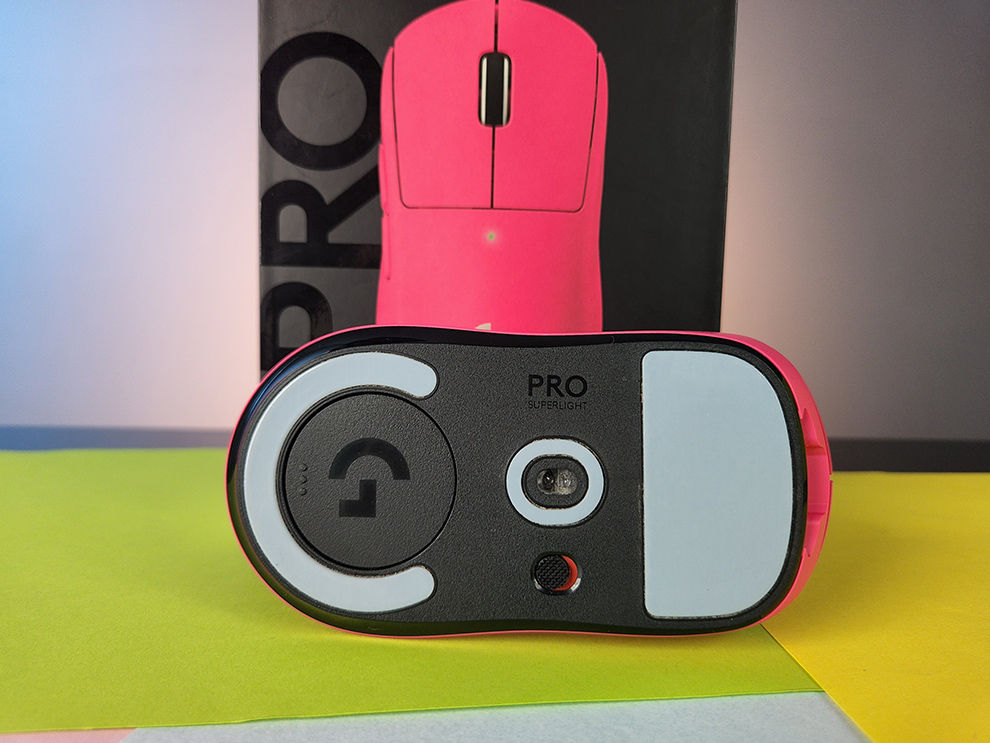 There is a charging cable included which is 1.8m in length, which is a pretty standard mouse cable length, and the mouse works wired as well, so you can plug it in when it’s low and continue using it as normal.

A lot of the features present on the G Pro Wireless have been stripped from the G Pro X SUPERLIGHT, so the mouse does fall short in the features department. For instance, the only way to change the DPI is via the G Hub software. You can obviously map the ability to change DPI to a mouse button, but your options are limited because you only have two extra buttons. Chances are, as a gamer those are already mapped to other in-game actions. 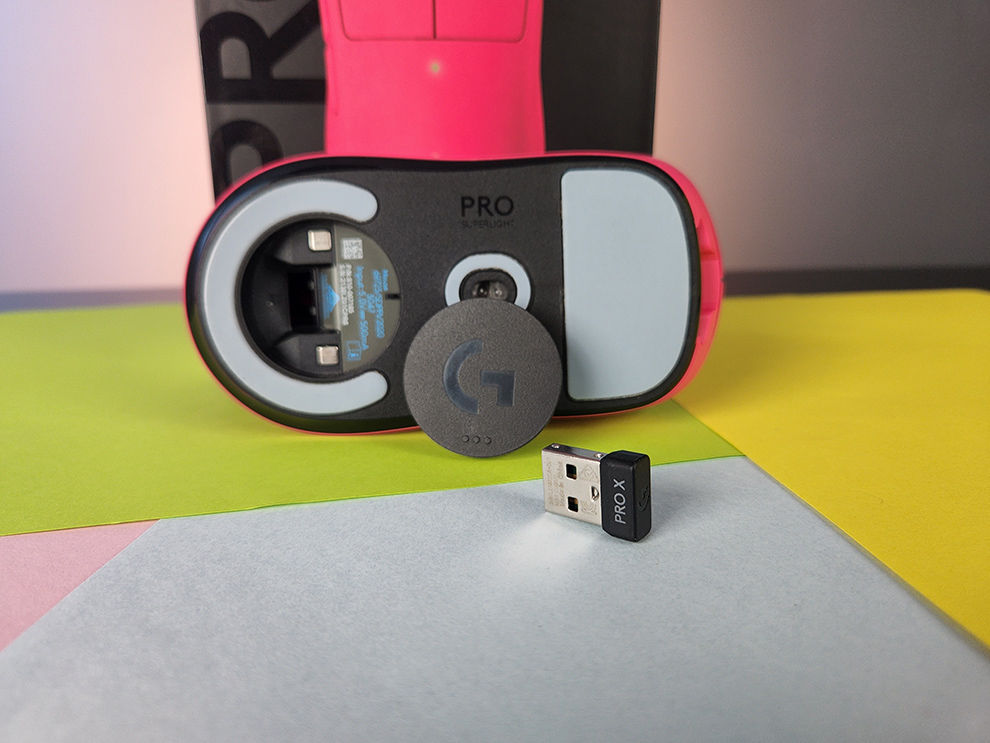 In case you do decide to assign other actions to the mouse, the mouse comes with onboard memory so you can carry the same settings along with you to other devices as well. You can also map the G-Shift action to a button allowing you to effectively have four more button actions from the mouse for a grand total of 9 actions. Holding down G-Shift essentially allows you to assign different actions to each button while the G-Shift button is held down. 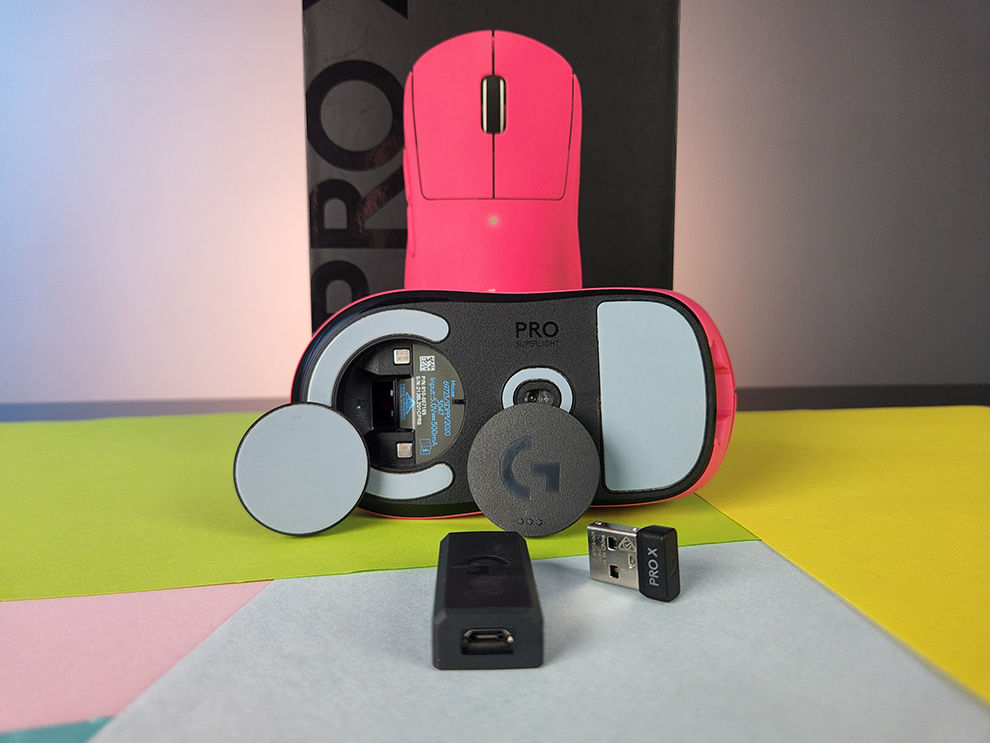 The polling rate can also be adjusted via the G Hub software, but that’s about it. The mouse doesn’t come with any angle snapping or acceleration.

Coming to the performance, we’ve got the excellent Logitech HERO 25K sensor, which ranges from 100 CPI to 25600 CPI. The CPI can be adjusted in steps of 50, which is great, especially if you want to finetune the CPI to your needs. We found the sensor to be fairly accurate and track well, which is consistent with previous Logitech mice we’ve reviewed which also featured the HERO 25K sensor. Like the Logitech G Pro Wireless, the G Pro X SUPERLIGHT also has low click latency, which is ideal for competitive online gaming, such as FPS and MOBAs. However, we can’t recommend this mouse for MMOs, where you would probably want more buttons to map actions to. 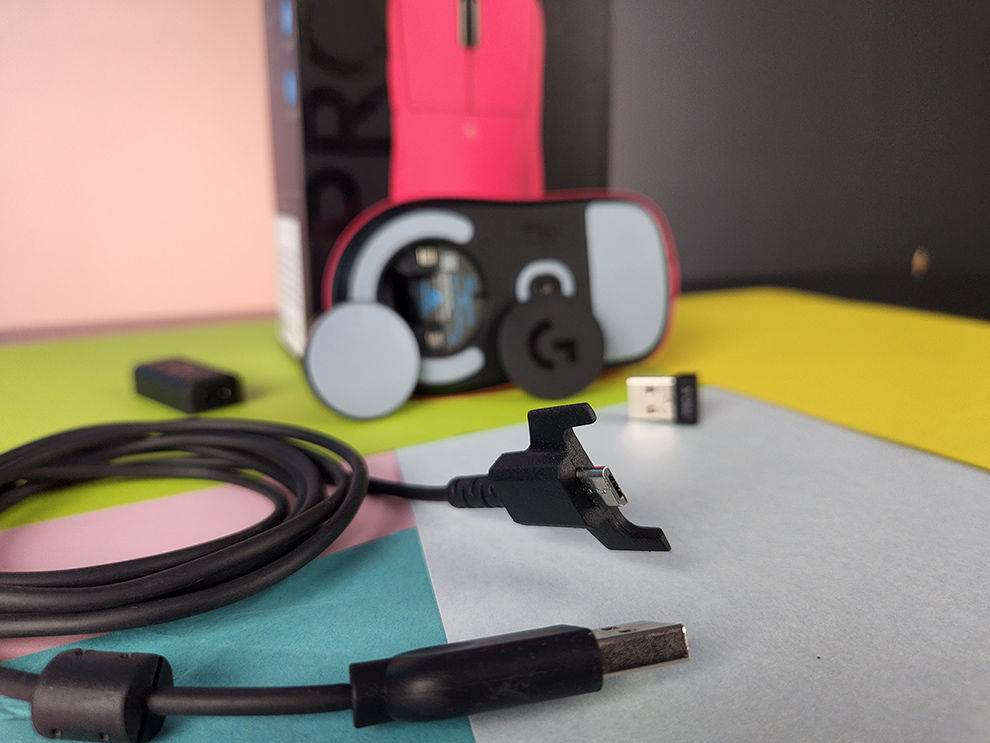 The mouse comes with a tracking speed of 400 IPS, so the mouse should track well and have no trouble keeping up even during high intensity gameplay. Like we mentioned, the mouse also has a maximum polling rate of 1000 Hz, which is standard at this point with gaming mice and should more than suffice for any of your gaming needs. 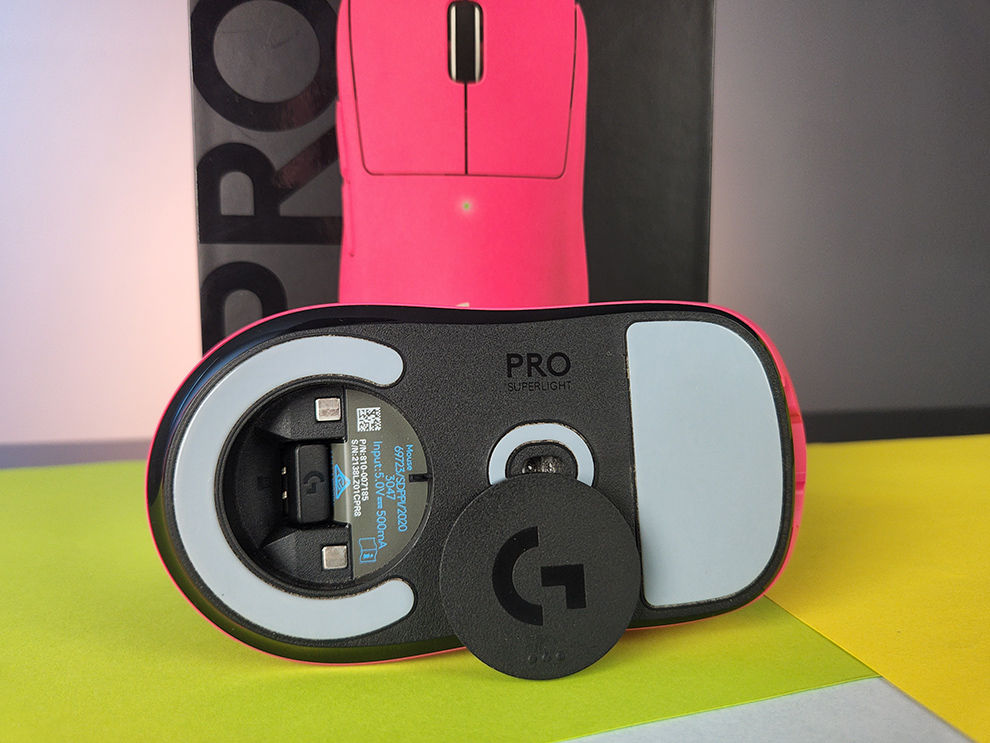 Coming to the battery, Logitech promises 70h of battery life from the G Pro X SUPERLIGHT at constant motion. We can verify that the mouse does indeed have impressive battery life, and have to charge it only once in two weeks.

The Logitech G Pro X SUPERLIGHT is a great lightweight gaming mouse, with an excellent sensor, great click latency, great build quality, and great overall wireless performance. It’s one of the lightest wireless mice we’ve ever tested, and you can certainly feel the difference between the SUPERLIGHT at the G Pro Wireless. However, the lightweightedness does come at the cost of certain features, but it’s up to you to decide whether the trade-off is worth it.