Before the era of streaming services like Netflix and Prime Video, consumers would go out and rent movies on DVDs. In those days a lot of DVD players were bundled with a 5.1 home theatre set up to offer a surround sound experience. This was an all-in-one package and manufacturers like Sony offered DVD player/home theatres set up in a variety of options. With the gradual rise of streaming services, home theatres in a box along with soundbars started getting prominence. Both the home theatre in a box and soundbar need to place speakers at specific positions for you to get the best surround sound experience. But what if you didn’t need to place the speakers symmetrically? Or the speakers need not be at the same height or equidistant from one another? What if the only important thing was placing the speakers in a convenient position facing your sitting position? That’s the problem the Sony HT-A9 aims to solve and it does so brilliantly! Let’s dive in.

In the box, you get the four cylindrical speakers along with a power cable for each. There is also a control box that connects to the TV and also connects to the speakers wirelessly. You get a remote control as well. While we did not get an HDMI cable in the box with the review unit, you do get one in the box. In the subwoofer box, we get just the subwoofer and the power cable. 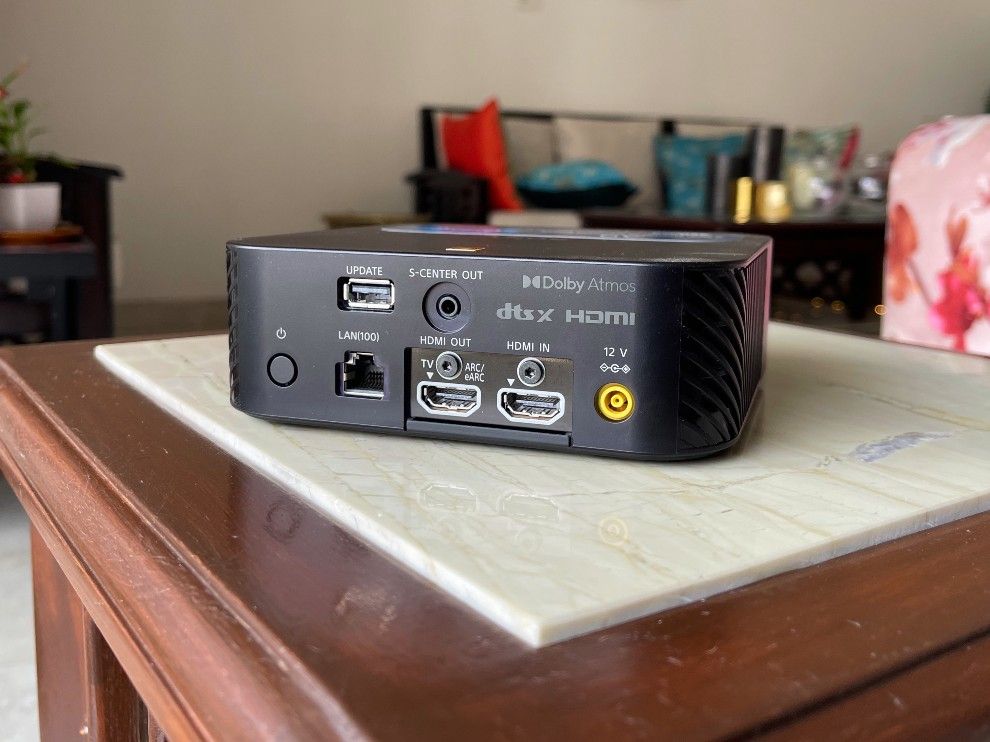 Each of the four speakers has an Up-firing speaker (X-Balanced Speaker Unit), Soft Dome Type Tweeter, Wide Directivity Woofer (X-Balanced Speaker Unit), and Dual microphones. While the Sony HT-A9 is compatible with the SW3 and SW5 subwoofer options, for the duration of the review we had the SW5 with us. When it comes to smart features, the system supports Amazon Alexa along with Chromecast.

Setting up the Sony HT-A9

Setting up the Sony HT-A9 is a unique experience. You don’t need to have space under your TV like you would for a soundbar. In fact, the only thing sitting below your TV is the control box which is about as big as two Apple TV 4K boxes. Each of the 4 speakers is marked as the front left, front right, surround left and surround right and all of them look identical. You don’t need to place them symmetrically, nor do you need to place them at the same height. They can be placed based on the layout of your room. Unlike a traditional home theatre where the accurate position of the speaker matters, that isn’t the case here. All you need to ensure is that the speaker point in your direction – the front speaker’s point in front and the surround speakers face the place where you will sit. 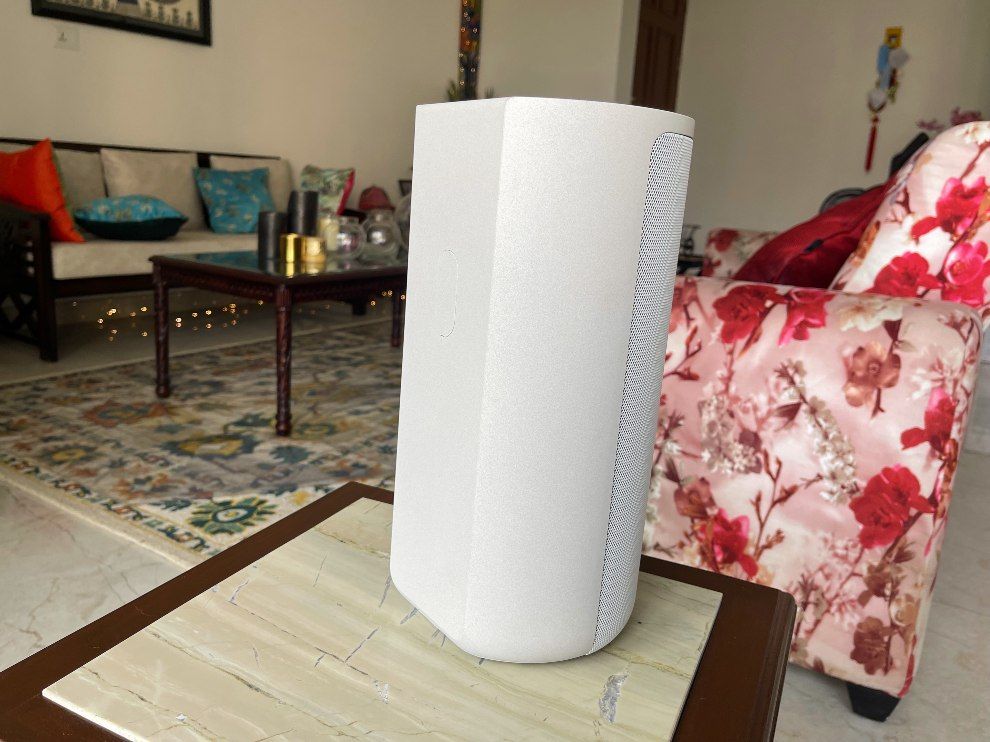 Once placed and connected to a power outlet, connect the control box to your TV via the HDMI cable. All the speakers and the subwoofer have a red light that turns green once the control box is on. On your TV switch to the HDMI eARC source. Just like the HT-A7000 and the HT-Z9F (review), The HT-A9 has onscreen instructions for setup and settings controls which is a boon, especially when compared to other soundbars.

Follow the onscreen instructions which will guide you to connect to Wi-Fi and also calibrate the system. It is very important that you go through the sound calibration, especially if the position of the speakers is not symmetrical as this will help the speakers not only determine their position but also the shape of the room to give you the best listening experience. Once the setup is complete, you can start watching your favourite content.

Huge is the first thing that will come to mind when you see the cylindrical speaker for the first time. To put things into perspective each speaker is as tall and as wide as an Xbox Series X (review). it is only slightly shorter than the PS5 (review). They are heavy and well built. While the speakers have a cylindrical design the back is flat making it easy to get the speaker to sit flush against the wall. Each speaker has an off-white colour and the front-facing driver and top driver are covered with a grill. The speakers don’t feel cheap in any way and will surely command attention. 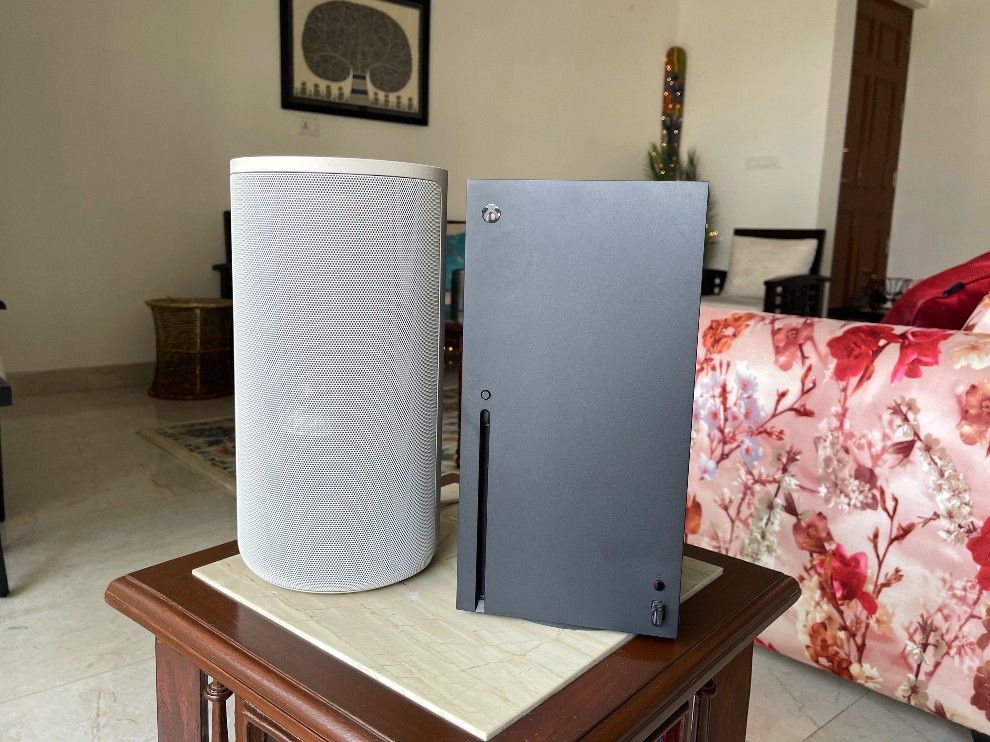 As mentioned above, each speaker has a Soft Dome Type Tweeter, Wide Directivity Woofer (X-Balanced Speaker Unit), Dual microphones and an Up-firing speaker (X-Balanced Speaker Unit). The speakers look very premium but it is possible that over time the white colour could get dirty so you may want to keep a soft cloth at hand for cleaning them. The control box is small and super minimal and will easily fit below your TV.

The promise of the Sony HT-A9 is to offer an immersive surround sound effect without having dedicated speakers placed in the respective sweet spot. In fact, the sweet spot is wherever you place the speaker so long as it is facing the sitting position and calibrated. Once calibrated, the Sony HT-A9 creates 12 phantom speakers offering users a surround sound experience. If you have a compatible Sony BRAVIA TV then you can use the TV as a centre channel for the setup. Yes, there is no dedicated centre channel for dialogues and we were curious to see how dialogues would perform in this setup. We connected the system to an LG B9 OLED TV and the results were outstanding. For the duration of the test, we consumed content from the TV built-in OTT apps, played some games on a PS5 and Xbox Series X.

We played a slew of content in 5.1 and Dolby Atmos on the TV and the output is fantastic. The front 2 speakers were conveniently placed below the TV and I changed their position to see how it affects the sound output. Same for the surround speakers. I recommend placing the surround speaker at about 6 feet away from you, facing you. Since these speakers create phantom speakers all around to give you a surround sound experience, they need the space to project sound in various parts of the room. In a movie like Ready Player One when the cars jump off the ramp, you can feel the sound move up in the room adding to the Dolby Atmos effect. Same for the Dark Knight Rises when you have Batman whizzing around on his motorcycle. The surround effects are truly immersive. 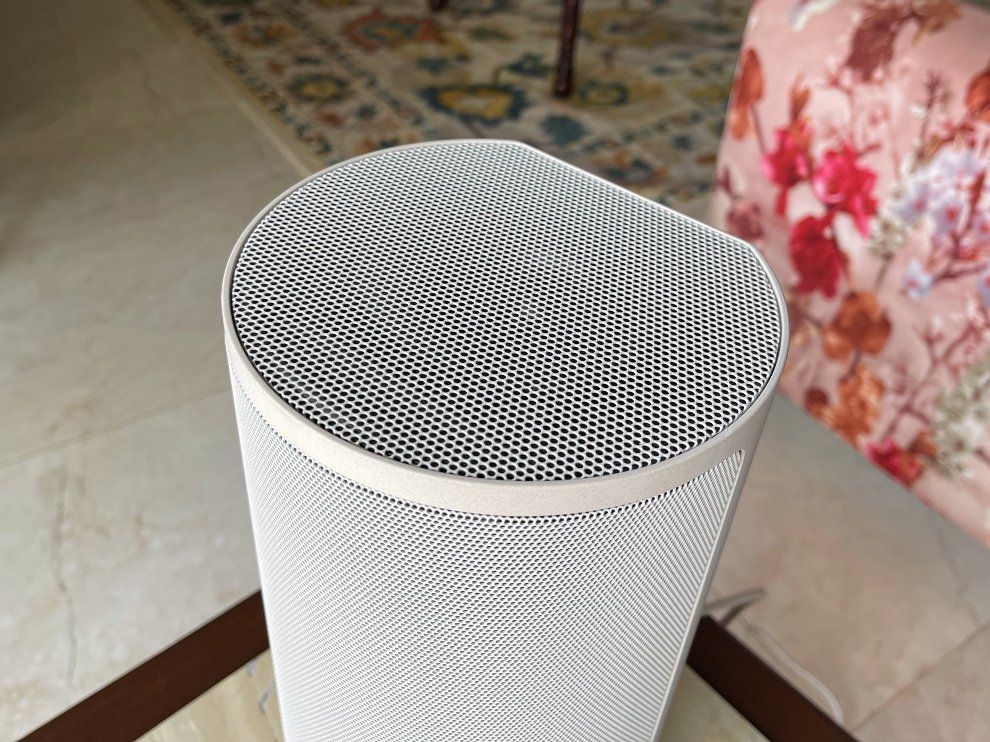 Like I said above at 6 feet away from me, the surround speakers made it so that the sound moved harmoniously between the surround and front speakers rather than it feeling as though the sound jumped from one speaker to the next.

Even in action sequences with a lot of dialogue, the centre channel was not missed. Now is a traditional 2.1 setup you notice that the sound isn’t coming from the centre and that can take away from the experience. There are soundbars like the Yamaha YAS 209 that do a good job of projecting a virtual centre channel and the Sony HT-A9 does this brilliantly as well. When a character was to the left or the right of the screen the sound came more from that direction, but when it was a conversation that would have benefited from a dedicated centre channel, it felt as though the dialogues were coming from right below the TV. The front speakers for my setup were kept 4 feet apart for most of the testing but this effect was equally pronounced and in fact better at times when the speakers were 6-7 feet apart. Not to mention the Sw5 subwoofer that added more than enough bass. Even watching 5.1 content like Ford vs Ferrari on Disney+ Hotstar, the surround effects of the cars and the grunt of the cars was immensely immersive.

Just like the HT-A7000, the HT-A9 supports Sony’s 360 Reality Audio and while I couldn’t get my hands on any music mastered in 360 reality audio, there is a demo on the system that you can experience to get a taste of it. This demo is also a very good testament to the channel separation and virtual surround capabilities of the system. With the home theatre, you get quite pronounced bass, deep vocals and very good channel separation. In addition to listening to our standard slew of music, we also saw a bunch of movies like Bohemian Rhapsody, Begin Again and more which have a lot of music. 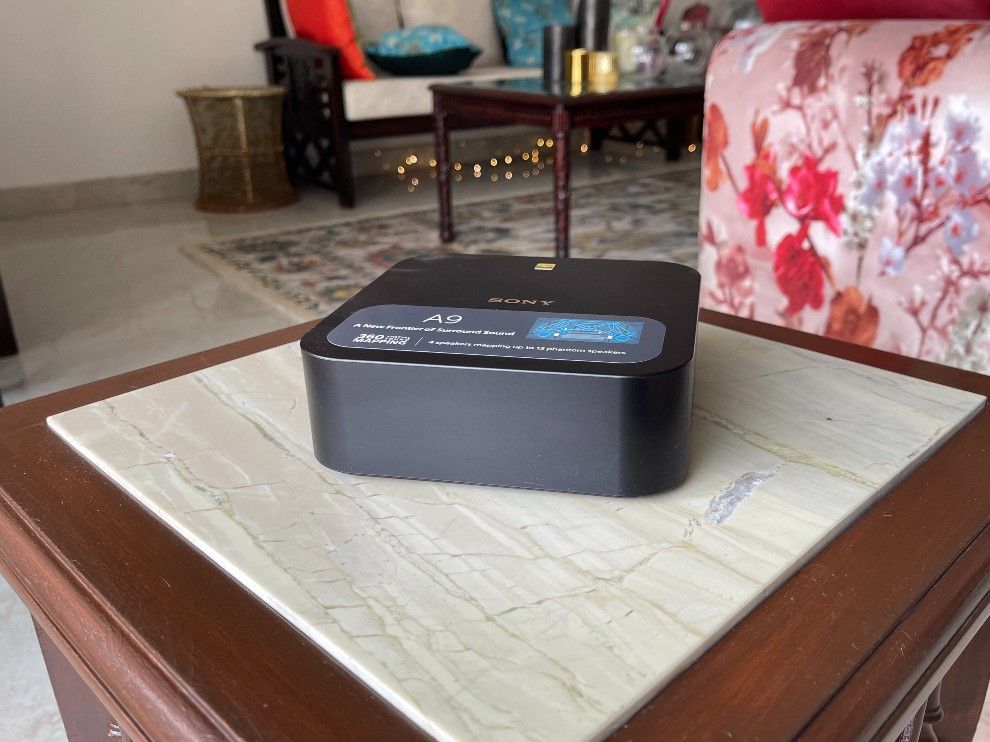 The music performance is overall very immersive and the channel separation implemented in songs like Bohemian Rhapsody is very pronounced.

We played a lot of games on the Sony HT-A9. From Horizon Forbidden West (review) to Ghost of Tsushima (review), some Dirt 5 and more. It is with the surround effects that the speakers truly shine. So, in a game like Dirt 5, the low end and grunt of the cars in Dirt 5 is extremely well pronounced and the positional sound of someone overtaking you from the left or right is very noticeable and immersive.

In Ghost of Tsushima when an enemy fires an arrow at you he announces it and the position of this announcement offscreen is also very clear, especially for the direction from where it is coming. The swish of the arrow flying around you is very immersive. Even in Horizon Forbidden West when you are getting attacked by a machine from behind, the surround speakers kick in adding to the immersion.

The Sony HT-A9 is almost identical to the A7000, in fact, only 2 buttons have been repositioned and the rest from the design, size and placement of buttons is identical. In addition to controlling the input source, you also get access to the Immersive AE (which I recommend you switch on and forget about), control for the volume, surround and subwoofer levels along with playback controls. The remote control is functional, intuitive and easy to use. 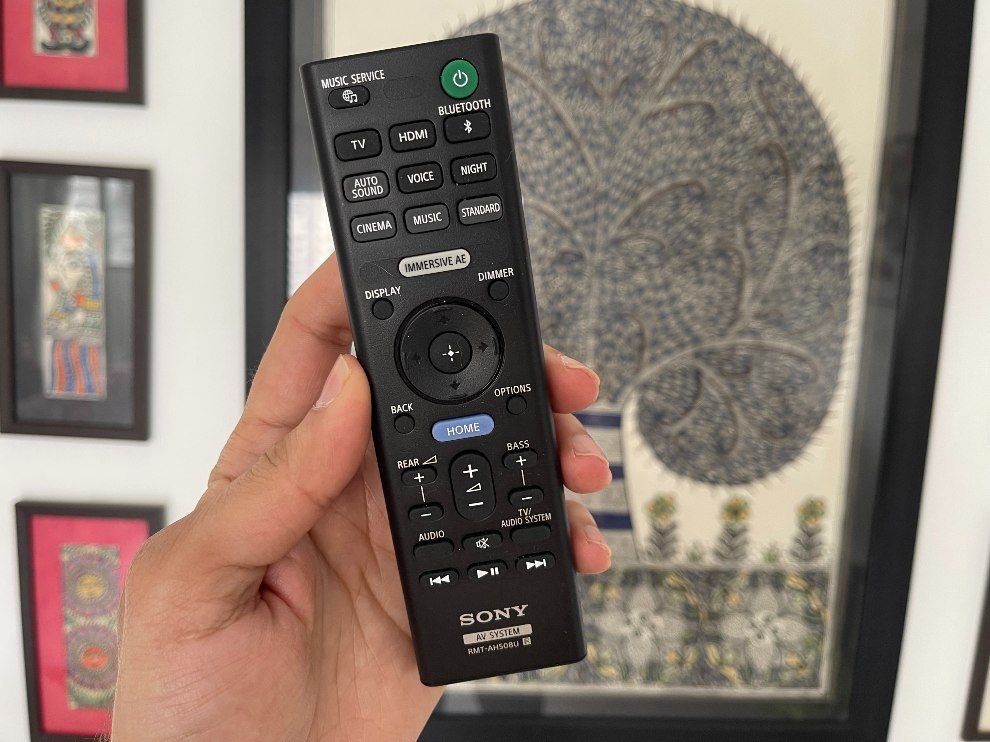 The Sony HT-A9 is aimed at those that don’t have the dedicated space for a soundbar below their TV or don’t have the space to symmetrically place speakers around their room. Placing the speakers at odd positions around the room in fact works in the system’s favour so long as the speakers are facing you. It provides an incredibly immersive experience once calibrated and the system has a lot of low-end grunt so you don’t miss the theatre. Each of the 4 speakers is huge and that’s a good thing as it provides an immersive virtual surround sound experience. The control box is minimal. The overall sound output is fantastic, offering a very good experience with no distortion at high volumes and the overall sound being extremely clear. The only con with the system is the absence of traditional connectivity options like optical and the fact that the speakers are white which means just like the PS5, you can expect this to get a little dirty after some use. But that’s just me nitpicking. If you don’t have the space or symmetry for a soundbar or home theatre, then the HT-A9 should be at the top of your list as it offers a surround sound experience without you needing to redo your room’s interiors.