the HyperX Pulsefire Haste Wireless is a great ultralight wireless gaming mouse. It features great build quality, is very comfortable to use, and features good latency as well. It feels smooth and glides well on just about all surfaces one might normally use a mouse on (desktops, mouse pads). The only place the HyperX Pulsefire Haste Wireless falls short is with its higher-than-average click latency. 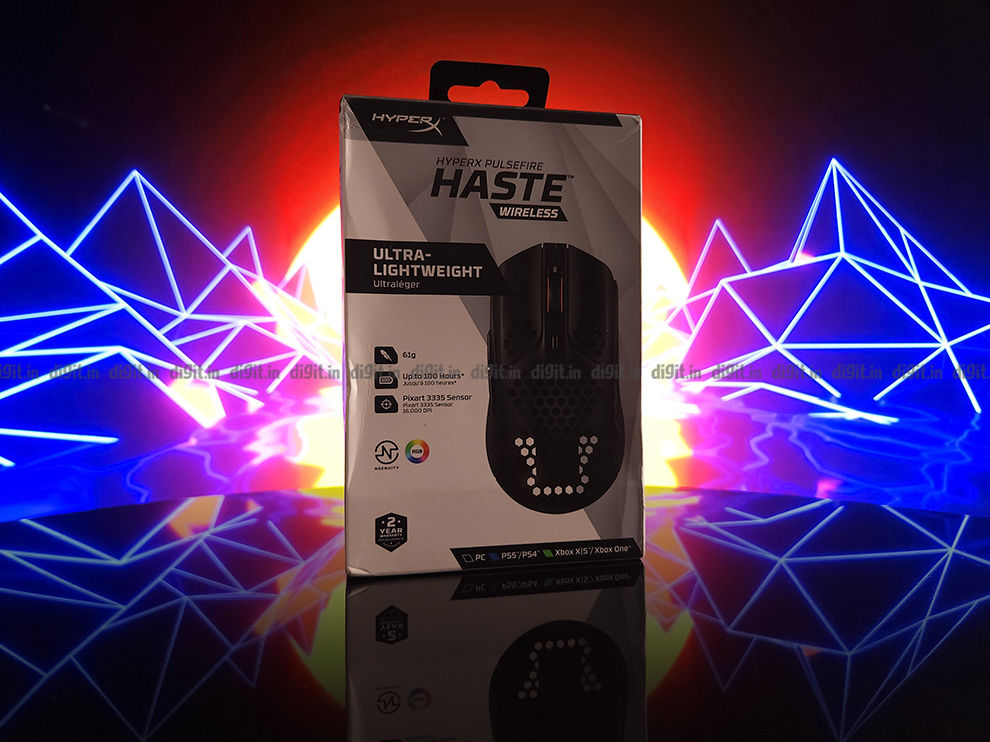 The Pulsefire Haste Wireless comes with the tried and tested honeycomb shell design which is common in superlight mice. We’ve got a full plastic matte black body, with cutouts throughout the palmrest and a little bit on the left and right click buttons as well. If you’ve used the wired variant of the Pulsefire Haste in the past, then it’s pretty much identical. Coming to the build quality on the HyperX Pulsefire Haste Wireless, it’s excellent. The materials don’t feel cheap despite being extremely lightweight at just 59g. There’s no rattle or moving parts, and there’s barely any squeaking or creaking when pressing down on the buttons too hard. The mouse is also rated IP55 for resistance to dust and liquids, which makes sense considering the cutouts on the mouse. The TTC Golden Micro Dust Proof Switches are a nice plus. An IP55 rating is also a lot more than most gaming mice offer. We’ve also got RGB at the scroll wheel, which is a surprise considering lighting is usually skipped on superlight mice. In addition to being customisable, the lighting also acts as a DPI switch indicator. 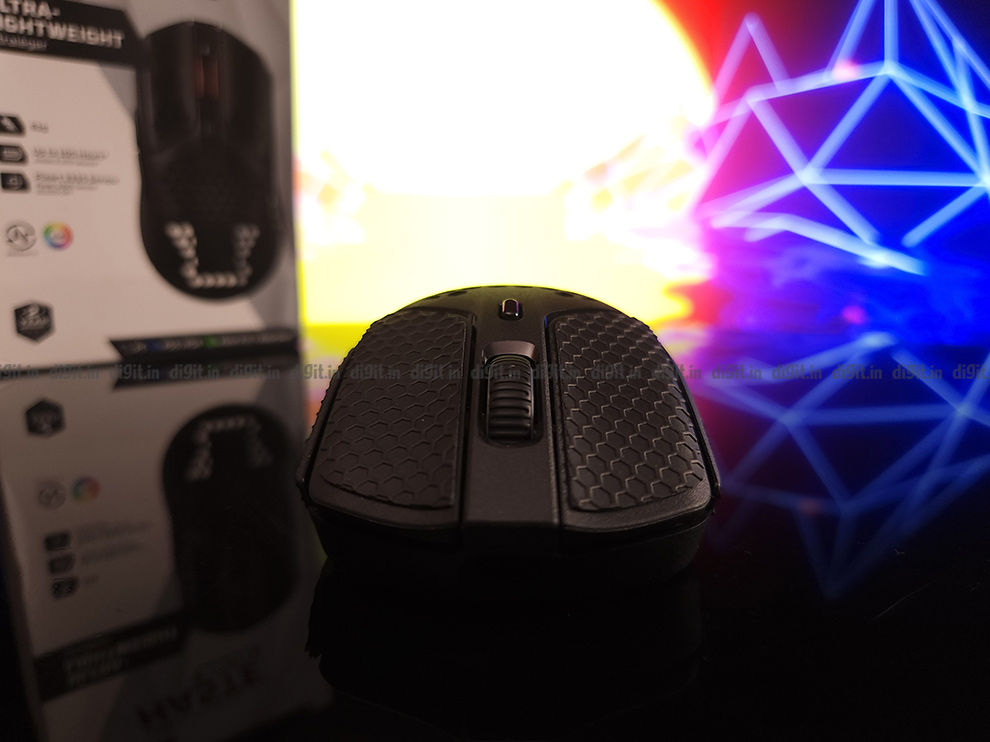 As for the shape, we’ve got a faux ambidextrous mouse design here, which is comfortable for both right-handed and left-handed users. However, it being a faux ambidextrous design, the side buttons are only available to right handed users since they’re on the left side of the mouse. The shape itself is very comfortable to use, even over long periods of time, regardless of your preferred grip type or the size of your hands. Unless you’ve got really small hands. 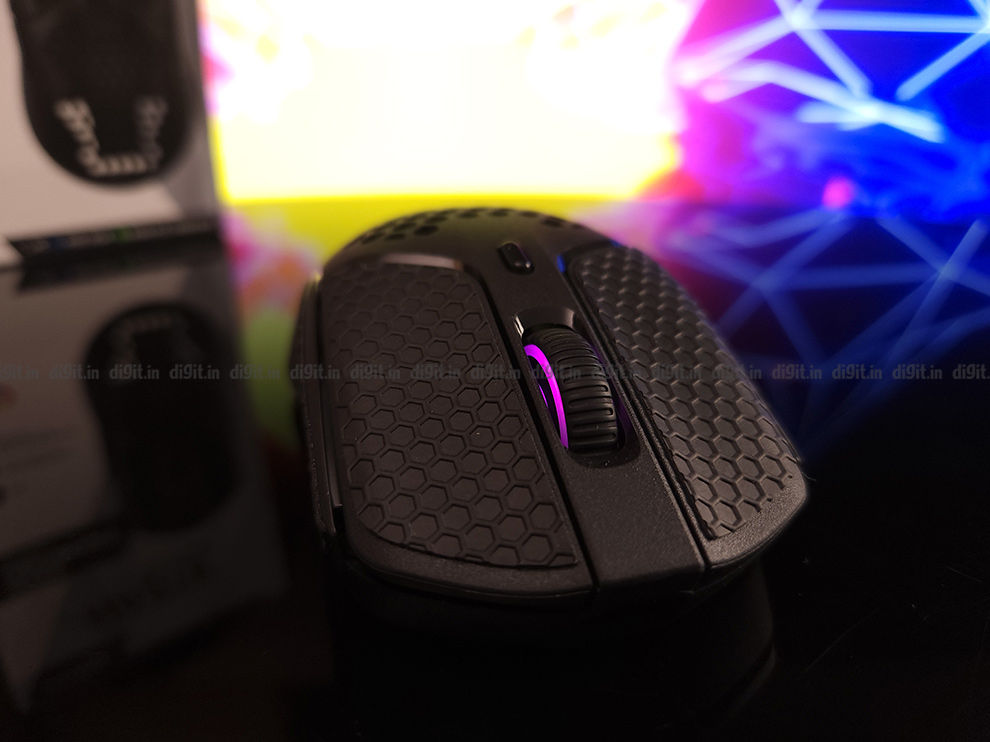 The mouse features virgin grade PTFE feet which glides smoothly on most surfaces. We had no issues on all the surfaces we tested on, i.e., smooth, glossy, friction. The box comes with extra feet as well. Additionally, the box comes with grip tape as well, which we found can make a significant difference in the grip feel on the mouse. Other than that, the box comes with a USB-A to USB-C charging cable, a USB receiver, and a receiver extender as well. 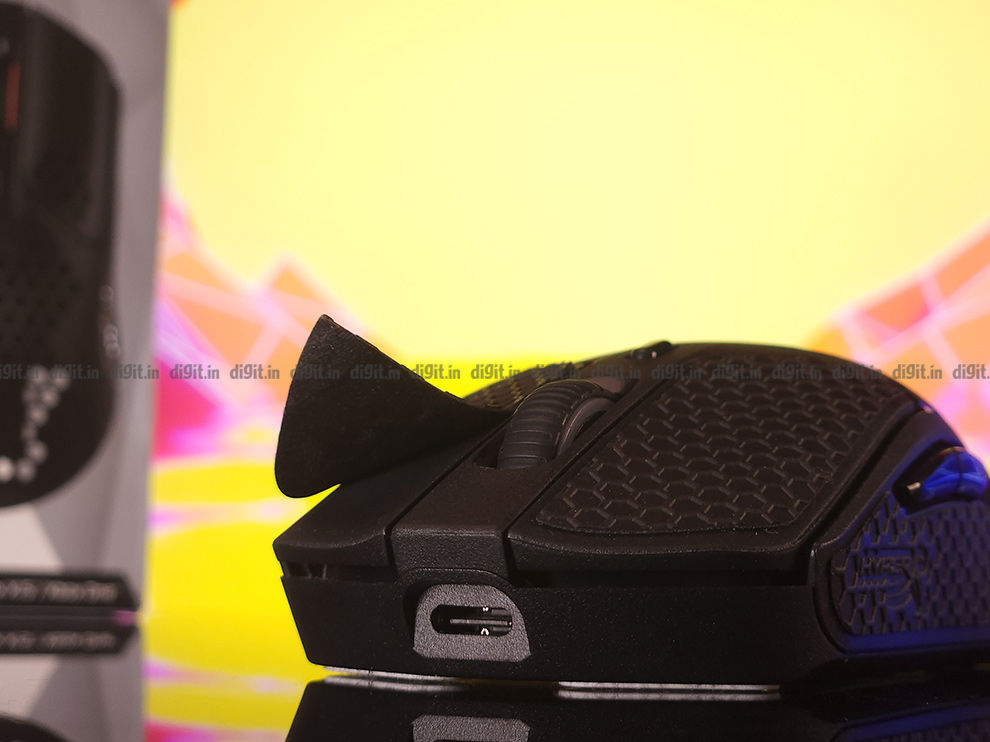 The HyperX Pulsefire Haste Wireless comes with 6 programmable buttons, including the DPI switch button, two side buttons, and the middle click button. The buttons are fairly loud and clicky, which we personally found very satisfying. Like we mentioned, the mouse comes with TTC Golden Micro switches, which are dust proof and are rated for 60 million clicks.

The Pulsefire Haste Wireless comes with the PixArt PAW3335 sensor, which has a maximum CPI of 16000, and maximum polling rate of 1000 Hz. The minimum CPI on the mouse is 200, and it’s adjustable in steps of 100, which is good. It would have been better if the steps were a bit more precise, steps of 50 perhaps. In our testing we found the PixArt PAW3335 to be quite accurate. When testing with MouseTester and DPI Analyzer, we found an average CPI differential of ±2 to the set default CPI of 800, which is great. We found that we got the best performance on glossy surfaces, but by a pretty small margin. The mouse scored well on all three tested surfaces on Enotus. 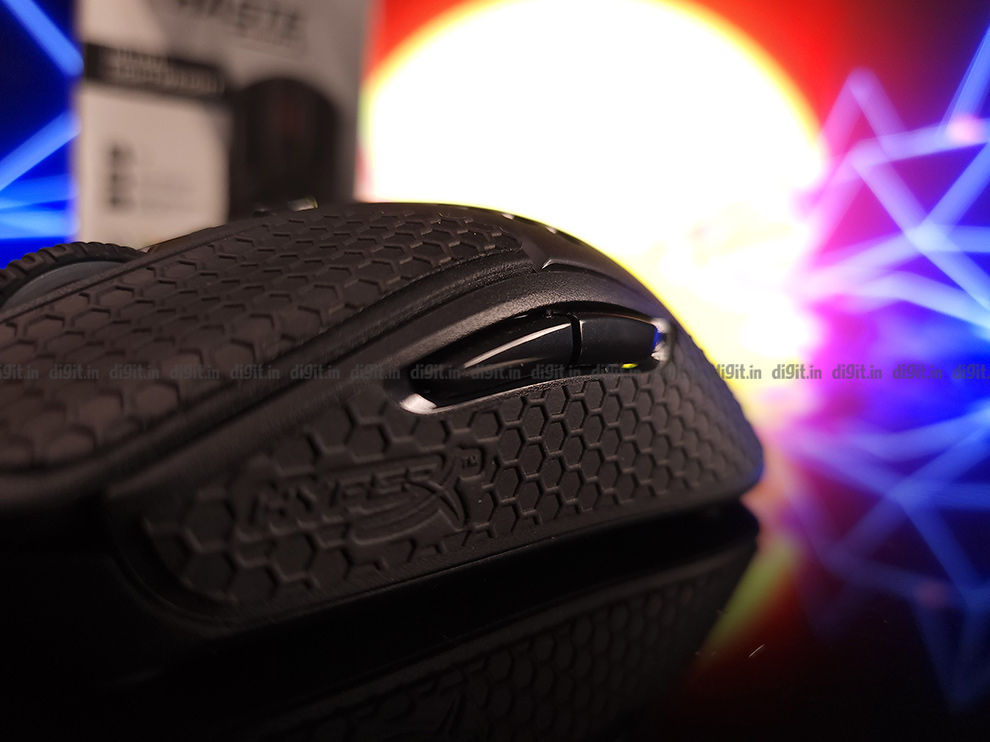 The only place the Pulsefire Hase Wireless falls short is in the click latency department. There is a noticeable difference in click latency when, say, compared to the recent Logitech G Pro X Superlight. This isn’t an issue for casual gamers, however, this could be a big no-no for anyone considering this mouse for competitive esports. 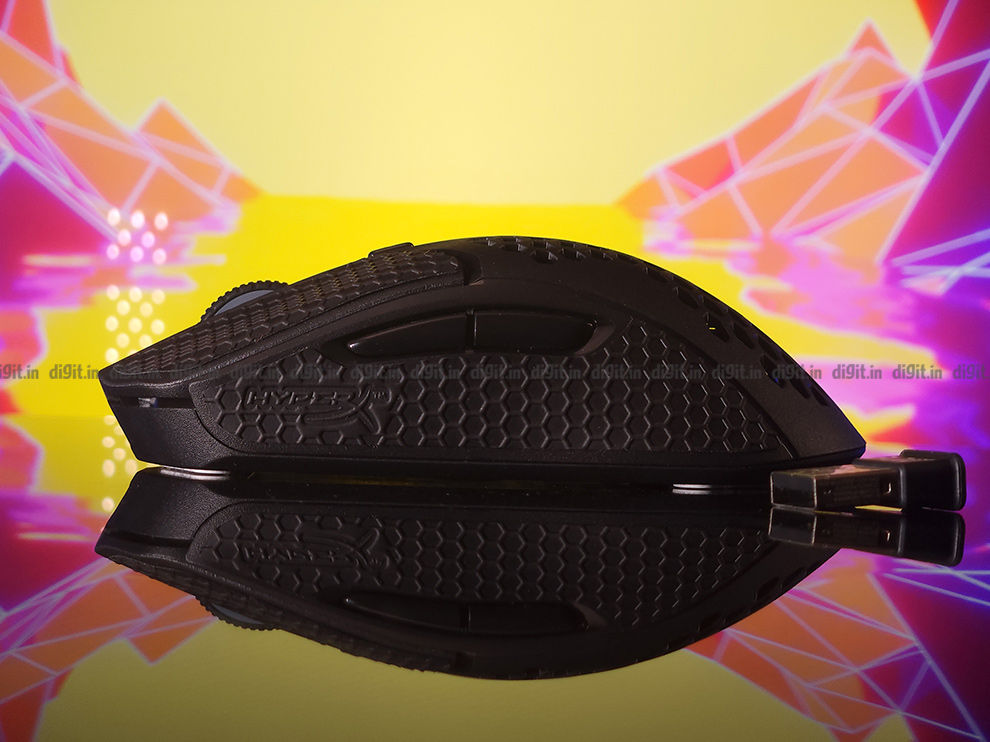 Finally, we come to HyperX’s NGenuity software. This is where you can see how much battery you have left on the mouse, redefine buttons, adjust CPI steps, polling rate, customise profiles, lift-off distance and lighting. We’ve always had issues with NGenuity in the past, but it looks like they’re working on the kinks, and it was a lot more intuitive this time around with a lot more customisation options at your disposal. The mouse has onboard memory as well, which can be customised via the software. 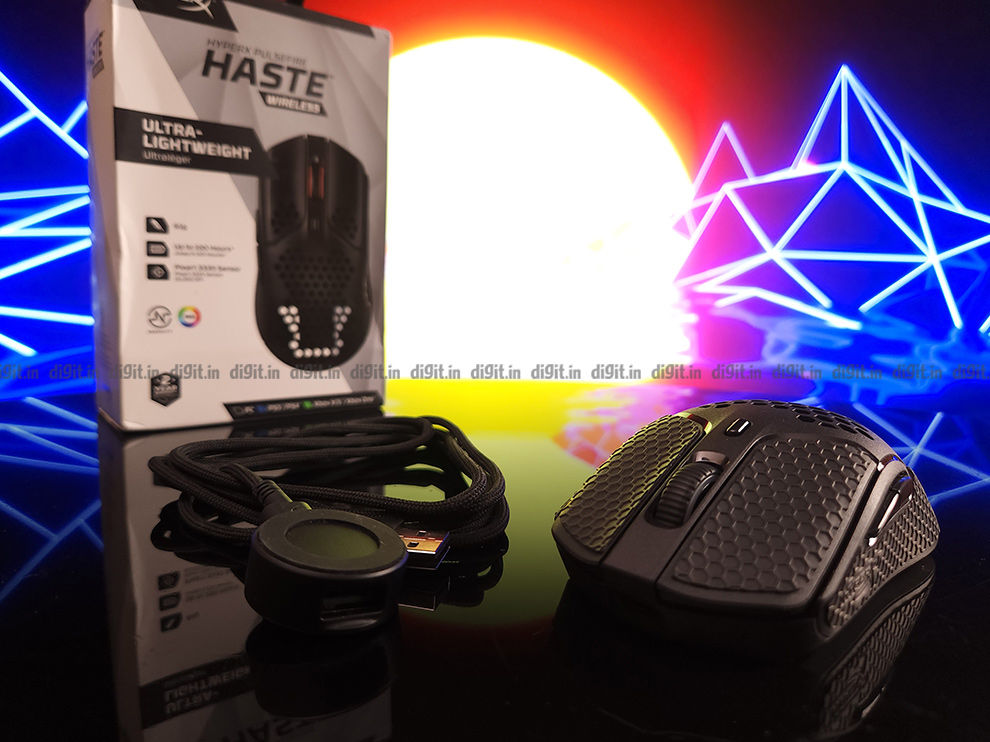 We don’t normally expect a ton of features on superlight mice, but the HyperX Pulsefire Haste Wireless has more than we expected. Most of these are software based features; in terms of hardware these mice are usually pretty barebones. The only standout feature we could see was the presence of RGB lighting in the scroll wheel area. 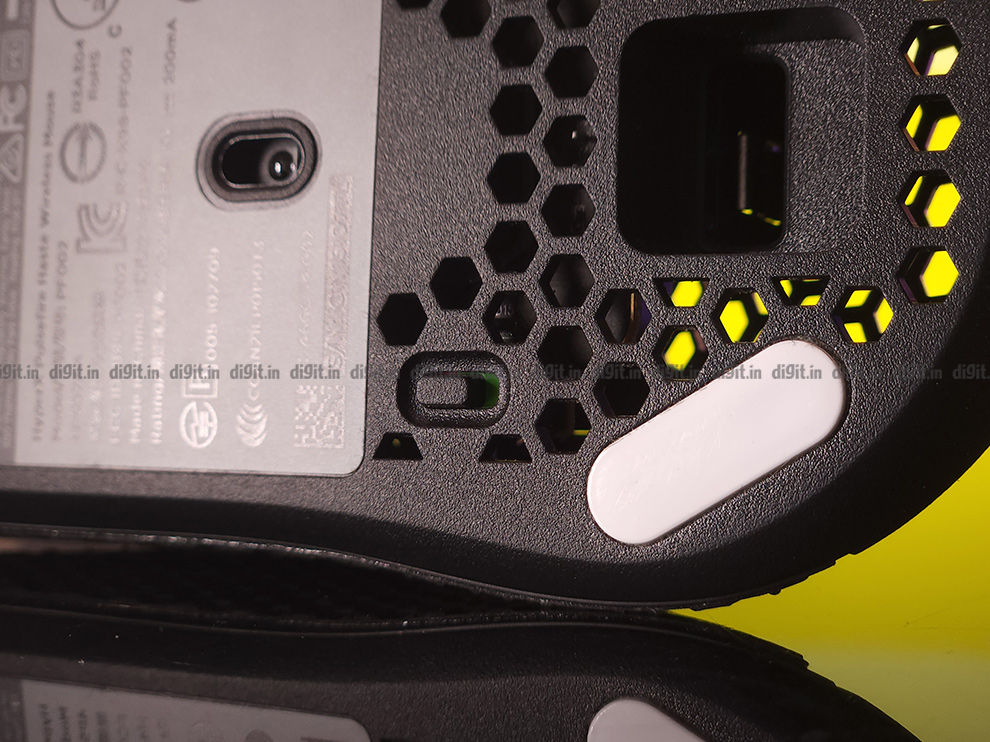 HyperX advertises a battery life of up to 100 hours on the HyperX Pulsefire Haste Wireless. In our time using the mouse, we haven’t found the need to charge the mouse yet. The mouse goes into sleep mode when inactive to preserve battery life, and needs a small shake to wake up. There’s a small delay before it lights up again. Otherwise, there’s a small switch under the mouse as well which can be used to turn the mouse on or off.

At Rs 7490, the HyperX Pulsefire Haste Wireless is a great ultralight wireless gaming mouse. It features great build quality, is very comfortable to use, and features good latency as well. It feels smooth and glides well on just about all surfaces one might normally use a mouse on (desktops, mouse pads). The only place the HyperX Pulsefire Haste Wireless falls short is with its higher-than-average click latency. It’s noticeably higher than its wired variant, which is a bummer. We have no complaints otherwise, and this is probably the best budget wireless gaming mouse you can get your hands on otherwise.