Owing to the tectonic alterations witnessed in the true wireless earphones segment, premium TWS earphones in 2022 offer an array of new features and improved performance. So, the Sennheiser Momentum True Wireless 3 has a lot to match up to. And it does that, on paper, at least. Equipped with Adaptive Noise Cancellation, aptX Adaptive codec support, Sennheiser Smart Control app, triple mic setup, Qi wireless charging, and a premium build, the Sennheiser MTW 3 looks like a stellar, top-tier noise-cancelling pair of earphones. But how do these earphones perform in real life, outside of all the marketing speak? Let’s find out.

The Sennheiser Momentum True Wireless 3 is the most premium-looking TWS earphones we’ve ever reviewed, period. The earphones are available in three colourways – Black, White and Grey. We got the Grey variant for review. The earphones have a shiny, metallic-textured finish that doesn’t look ostentatious in any way. In fact, it’s the exact opposite; they exude premium-ness. The charging case looks almost identical to the previous-gen models with its suave fabric material. 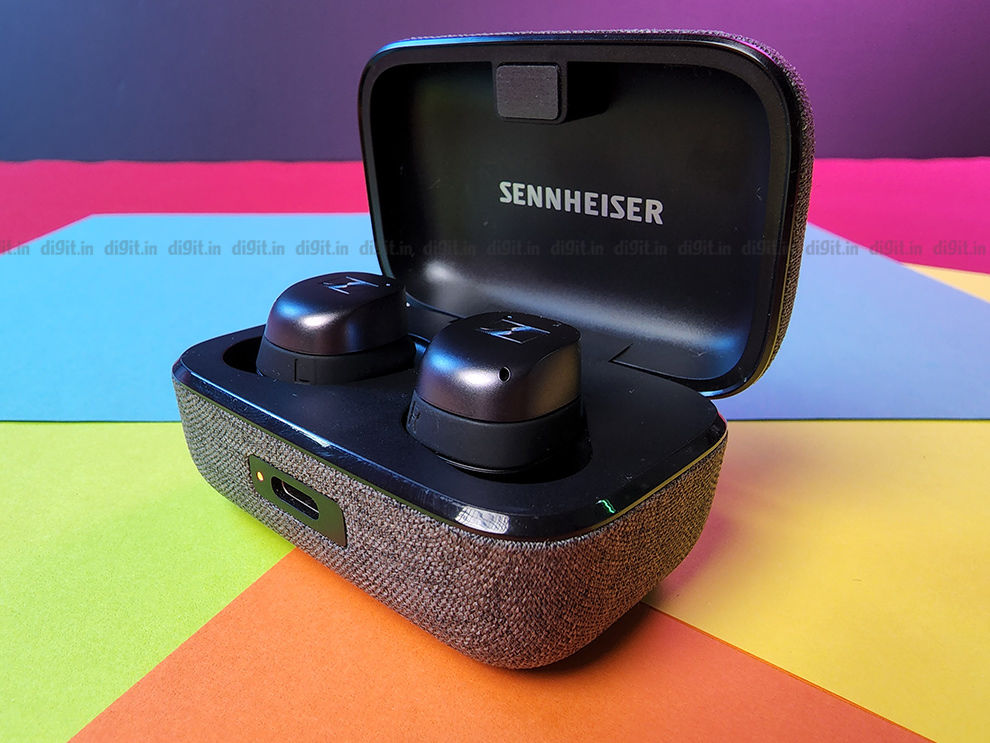 The Sennheiser logo on top of the case contrasts well against the grey fabric. The front houses a USB Type-C charging port and an LED battery indicator. Upon opening the case, you can see another Sennheiser logo inside the lid. The hinge is only reinforced by plastic, so it doesn’t feel robust enough. The magnets inside the case, on the other hand, are robust and hold the earphones inside securely. 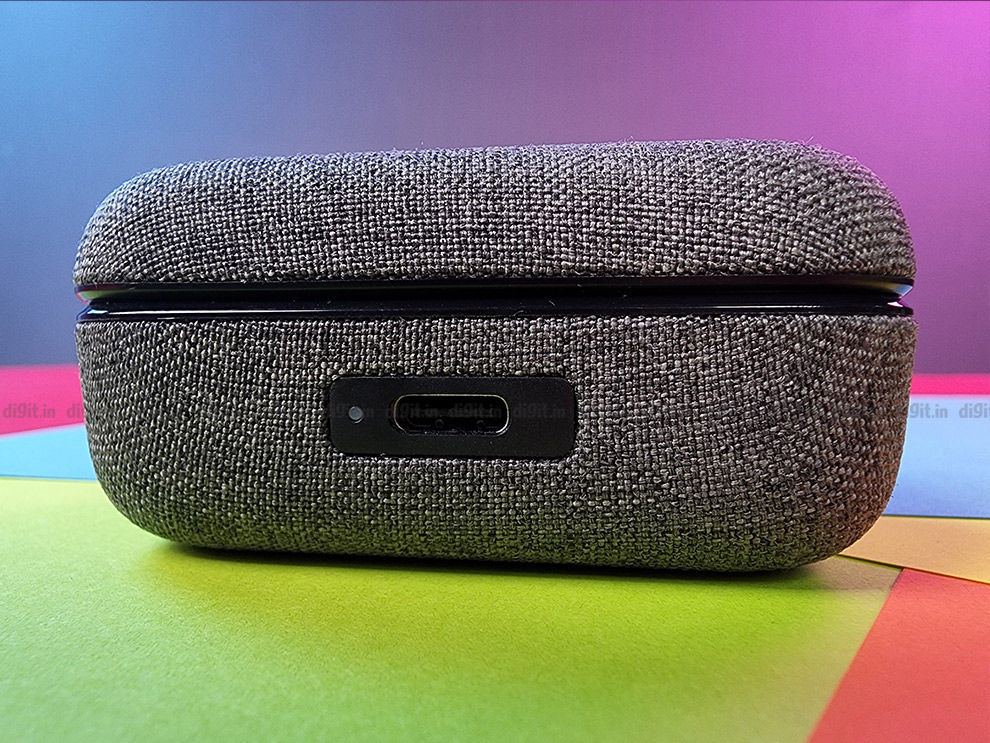 While the earphones look pretty svelte, they aren’t as compact as competitors from Samsung and Jabra. They’re definitely more streamlined than the Sony WF-1000XM4 earbuds. The back of the earbuds features the Sennheiser logo and this area houses touch controls for music playback and calls. The touch controls are very responsive and worked well in our testing; with only a few misreadings. However, they’re a bit too responsive at times and get activated even with slight, unintentional touches. 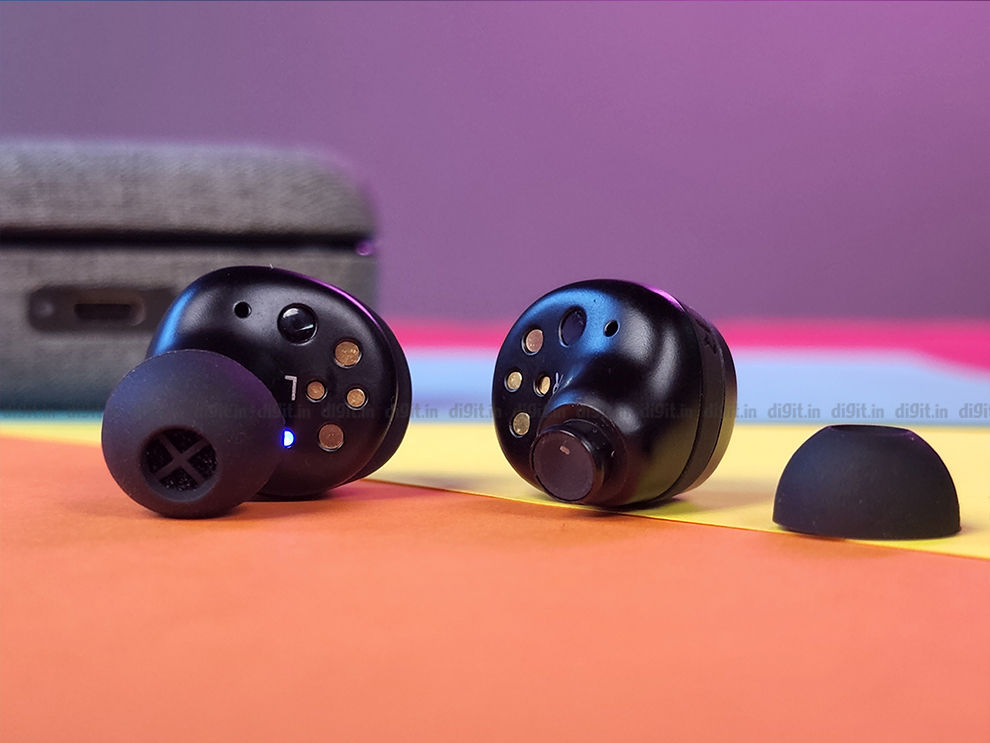 One great addition to this iteration of the Momentum True Wireless earbuds is silicone wings. Not only do the earbuds come with an assortment of silicone ear tips (XS, S, M, L) but you also get three sizes of silicone wings to choose from that give the user an extra snug fit. 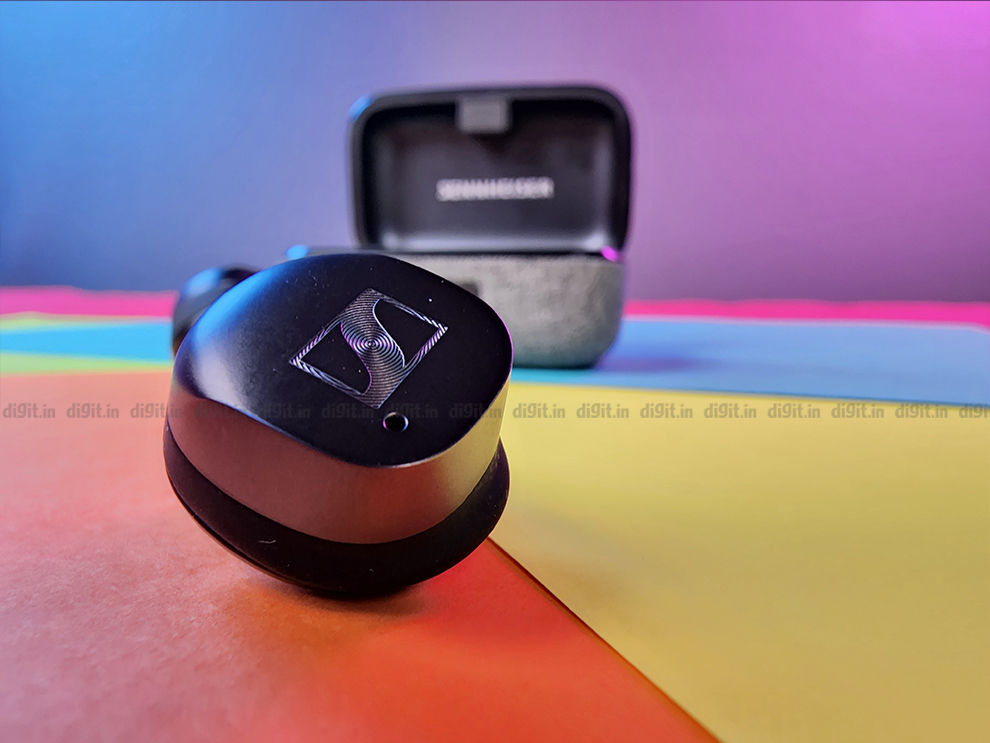 Sennheiser’s premium lineup of TWS earbuds has never been more well-fitting than this rendition. These are earphones we would be happy to recommend to fitness enthusiasts to use when running or gymming. The array of silicone ear tips and wings ensure that most users will get a snug fit that barely budges no matter the ongoing activity. While the earphones aren’t the most lightweight on the block, we still found them comfortable to wear over long periods. 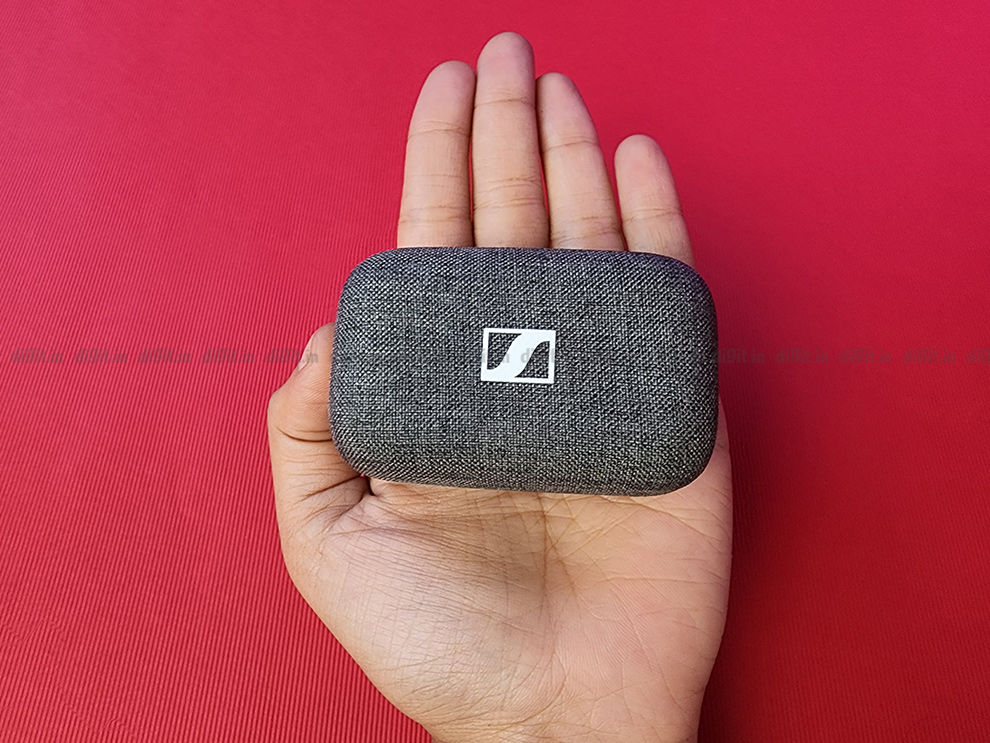 The only complaint we have with the build of these earphones is the bulky size of the charging case. It is one of the larger cases we’ve come across in 2022 and it does look rather large in comparison to diminutive cases from companies such as Samsung, OnePlus and Jabra. You may find it harder to fit into smaller pockets and even if you do, the case will bulge out visually. That aside, the premium you’re paying for these exorbitant earphones is worth it due to the stellar design and the outstanding fit. 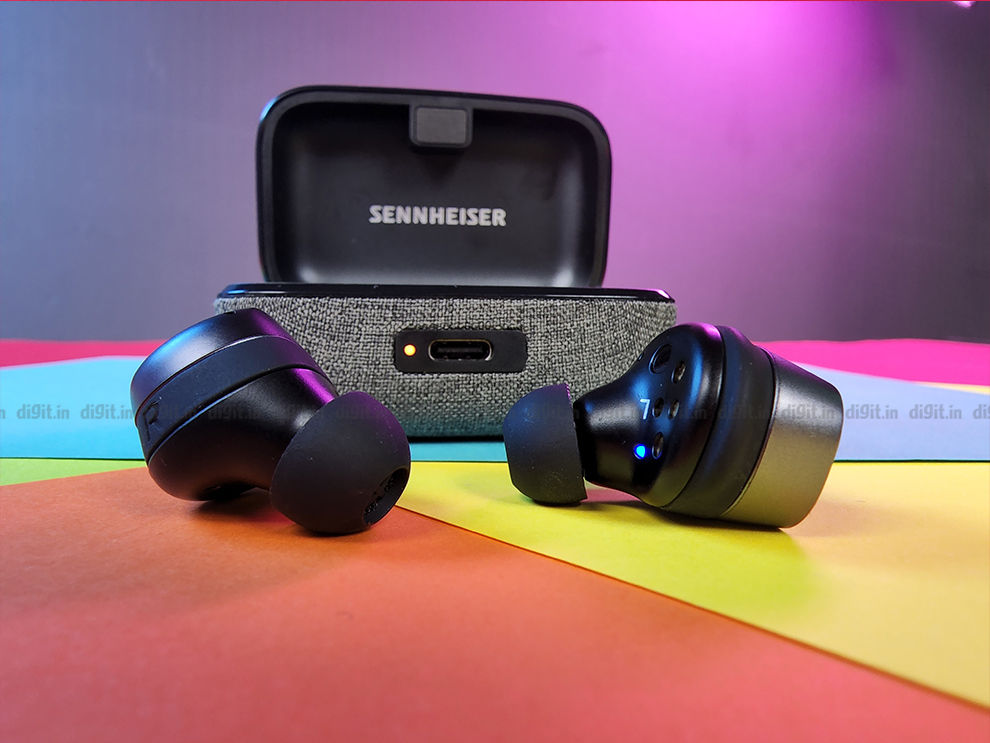 The noise cancellation on the MTW 3 is excellent, no doubt. The earphones not only manage to curtail low-end, constant sounds such as an airplane’s drone or an AC’s hum but also significantly reduce more erratic, high-pitched sounds such as typing on a mechanical keyboard, the whirring sound of a high-speed fan and people speaking. In fact, it is almost as effective as the Sony WF-1000XM4 at cancelling ambient sounds. There are some instances where Sony is more effective and some instances where the Sennheiser shines more.

The Sennheiser Smart Control app is supported by these earbuds and is a great accompanying app that grants access to quite a few features. You get access to features such as an equaliser, sound zones, custom touch controls, and more. You can also check battery levels, perform firmware updates, and more. Now, the equaliser on this app isn’t our favourite; it severely lacks EQ bands and thus, limits how much you can tune the sound. The app also comes with a couple of presets such as Bass Boost and Podcast. 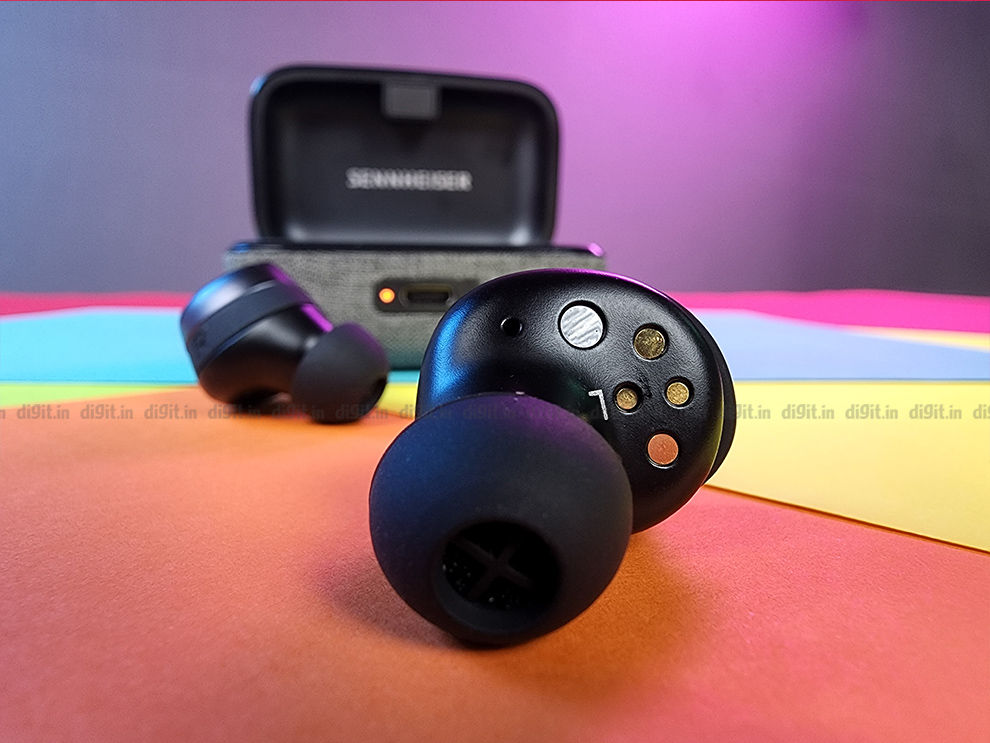 The app also allows users to customise controls so you can tweak the functions for the single tap, double tap, triple tap, and touch and hold actions. Sennheiser has also included volume controls, which is something that manufacturers often skip out on. You can also choose to turn off touch controls altogether if you prefer that.

The Sennheiser app also comes equipped with a feature called Sound Zones. You can set EQ profiles and Noise Cancellation modes specific to a location and the earbuds will automatically switch to this mode when you enter the area. It is a pretty useful feature, in our opinion, and it worked remarkably well during our testing phase.

Other features on the Sennheiser MTW 3 include Bluetooth v5.2 connectivity, Qi wireless charging support, mono earbud operation, and IPX4 sweat and splash resistance. While these are definitely one of the most feature-laden earphones we’ve tested, they miss out on multipoint connectivity (at the time of launch, at least) that allows users to connect the buds to two devices simultaneously.

Equipped with 7mm TrueResponse transducers, the Sennheiser Momentum True Wireless 3 is one of the best sounding earphones we’ve ever had the pleasure of reviewing. The earphones support SBC, AAC, aptX and aptX Adaptive codecs, the latter two injecting a dose of detail to the sound. aptX also minimises latency, allowing the video and audio feed to be in close sync. The Sennheiser Momentum True Wireless lineup has always used 7mm drivers, but with newer renditions, Sennheiser has always made tweaks and improvements to the sound and connectivity via the chip and software.

The Sennheiser MTW 3 provides open, detailed sound quality rivalled by a few in the consumer TWS earphones category. The closest competition in terms of sound is the Sony WF-1000XM4 which provides a bit more analytical, close-to-neutral sound while the Sennheiser packs some more oomph in the bass notes.

The bass is slightly boosted on the Sennheiser MTW 3, more so than on its predecessor. While purists may be turned off by this fact, the bass response is tight, controlled and detailed despite being slightly boosted. There’s no sign of muddiness or boominess even in tracks with strong bass notes such as Another One Bites the Dust by Queen. There’s no dearth of drive or energy and the sound is spunky yet meticulous.

The mids are exquisitely produced; almost close to neutral. The earphones don’t come with dual drivers, so sometimes the bass notes can slightly shroud the mids, but only on rare occasions. Instruments and lead vocals sound pristine with great clarity and vigour. The highs, in typical Sennheiser fashion, are underemphasised after 4 kHz, but Sennheiser does this to minimise the frequency of sound that causes fatigue when listening. Some of the precision that comes naturally to the Sony WF-1000XM4 is missing here, but they’re still one of the most detailed sounding pairs of TWS.

Not just that, they’re also one of the most open-sounding TWS with a massive soundstage that expands sideways and even upwards. This really enhances the listener’s immersion. Listening to Shine On by Pink Floyd, you can hear every breath, and every guitar pluck easily and all these sounds are placed within the soundstage accurately indicating excellent imaging as well.

Moving on to the microphone quality, the earphones come packing three beamforming microphones per earbud that assist in noise cancellation as well. The caller’s voice sounds crisp with minimal distortion and the ambient sound is also subdued considerably when on calls. The AirPods Pro are still much better when it comes to call quality but Sennheiser’s offering isn’t really too far behind.

The Sennheiser Momentum True Wireless series of truly wireless earphones have always had cutting edge technology with excellent sound and features. However, as far as we can recall, battery life has always been an area where they have lagged behind the competition. Unfortunately, this has somewhat continued even with the Sennheiser Momentum True Wireless 3. While the earphones match up to the AirPods Pro in terms of battery life, offerings from Sony and Jabra do outclass them in this regard.

The Sennheiser MTW 3’s battery life is rated at 7 hours on the earbuds alone and 28 hours in total (including the charging case) by the company. While this is close to real-world numbers, when you turn on ANC or Transparency Mode, the numbers drop significantly. We got 4 hours and 25 minutes from the earbuds alone and the case provided 3 extra charges. While this is decent enough, it doesn’t match up to the performance of the Sony WF-1000XM4 and the Jabra Elite 7 Pro. 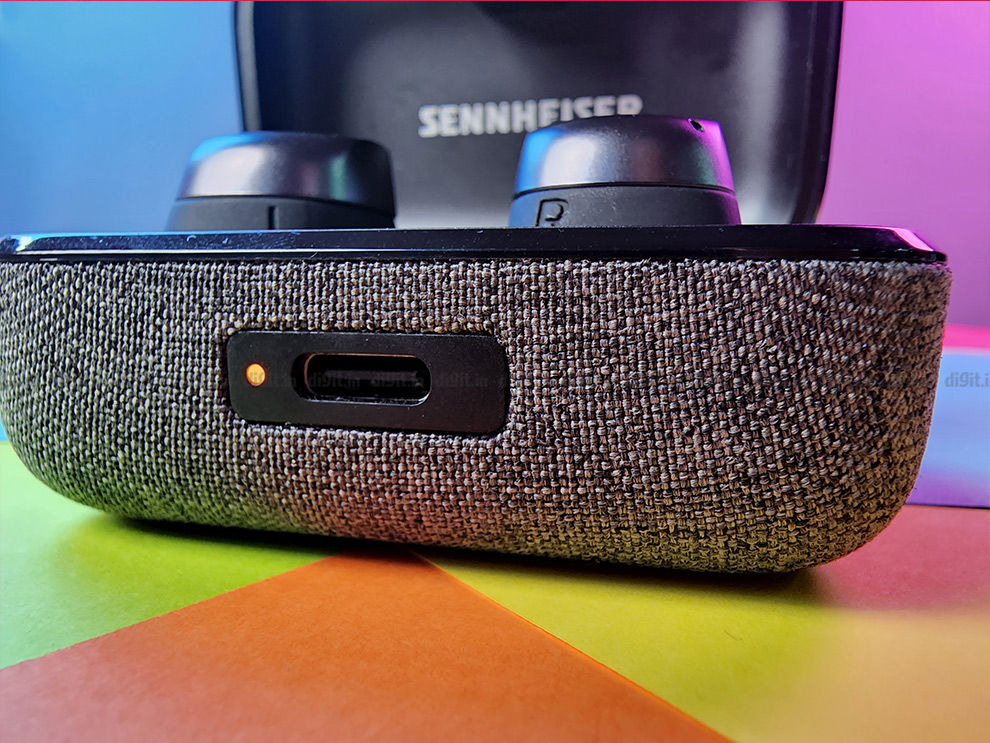 The Sennheiser Momentum True Wireless 3 embody the word “refined”, in our opinion. Sennheiser has gone ahead and improved the earphones in more ways than one but they’ve stuck to their DNA – what makes Sennheiser earphones, so blatantly Sennheiser. Whether it’s the tried-and-tested design or the Sennheiser signature sound, all of it is here in all of its glory. But you also have an array of improvements in regards to codec support, app features, sound quality, and ANC performance.

One area Sennheiser needs to turn its attention towards is battery life, where Momentum earphones have typically lagged behind the competition. But at the price of Rs 21,990, the Sennheiser Momentum True Wireless 3 are fantastic, top-tier earphones that give us very little to complain about. Additionally, Sennheiser has also dropped the price by Rs 3,000 in comparison to its predecessor which makes it easier for the earphones to compete with the excellent Sony WF-1000XM4.