Sony’s WF lineup of truly wireless earphones is renowned for its healthy mix of performance and features. But the company hadn’t dipped its toes in the budget segment under 6K, until now. In a price-conscious market like India, it only makes sense to have a solid offering in the budget TWS segment as well given its popularity. The Sony WF-C500 is the company’s first attempt at a budget TWS. Priced at Rs 5,990, the WF-C500 does have its fair share of contenders which begs the question, should you buy these earphones over the likes of earphones such as the Nothing Ear 1. Powered by 5.8mm drivers and Bluetooth 5.0 connectivity, the Sony WF-C500 does look fairly promising on paper. However, it stands on the shoulders of giants from Sony such as the WF-1000XM4. So, do these earphones fare well in our tests and real-world scenarios? Let’s find out.

Featuring a small, lightweight build, the Sony WF-C500 is targeted towards on-to-go listeners. The buds are primarily built out of plastic but don’t feel inexpensive or plasticky. They’re rated IPX4 for sweat and splash resistance as well, making them handy for everyday listening as well as workouts. Inside the completely plastic-free box (major props to Sony here), you will find two additional sets of silicone ear tips – S and L while the medium ones are already preinstalled on the buds. The ear tips should provide most users with a comfortable and snug fit.

The rounded sides of the earbuds rest comfortably against the ear while also feeling secure enough to go walking or jogging with them. The buds need to be twisted and locked into place to get the most secure fit possible. The snug fit also ensures excellent passive isolation, so you don’t miss Active Noise Cancellation too much. However, do note that competitors such as the Nothing Ear 1 do come with ANC. But we still prefer the fit of the WF-C500 to that of the Nothing Ear 1. Overall, the buds are comfortable, snug and secure for the most part with commendable build quality for the price. 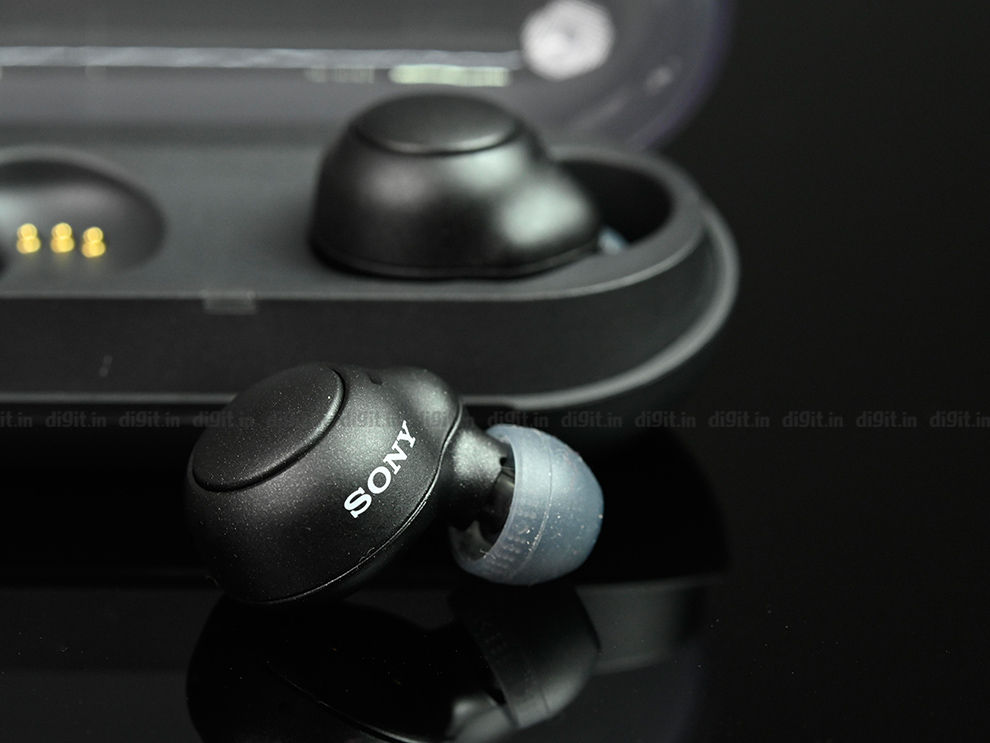 One gripe we do have with the earbuds is the quality of the physical controls. The backs of the buds feature a physical button that needs to be pressed down to record actions. The act of pressing the buttons may cause stress to the inner ear since you are pushing the buds even further down your ear canal when pushing the buttons. The buttons are also hard to press and refused to register certain actions, at times. 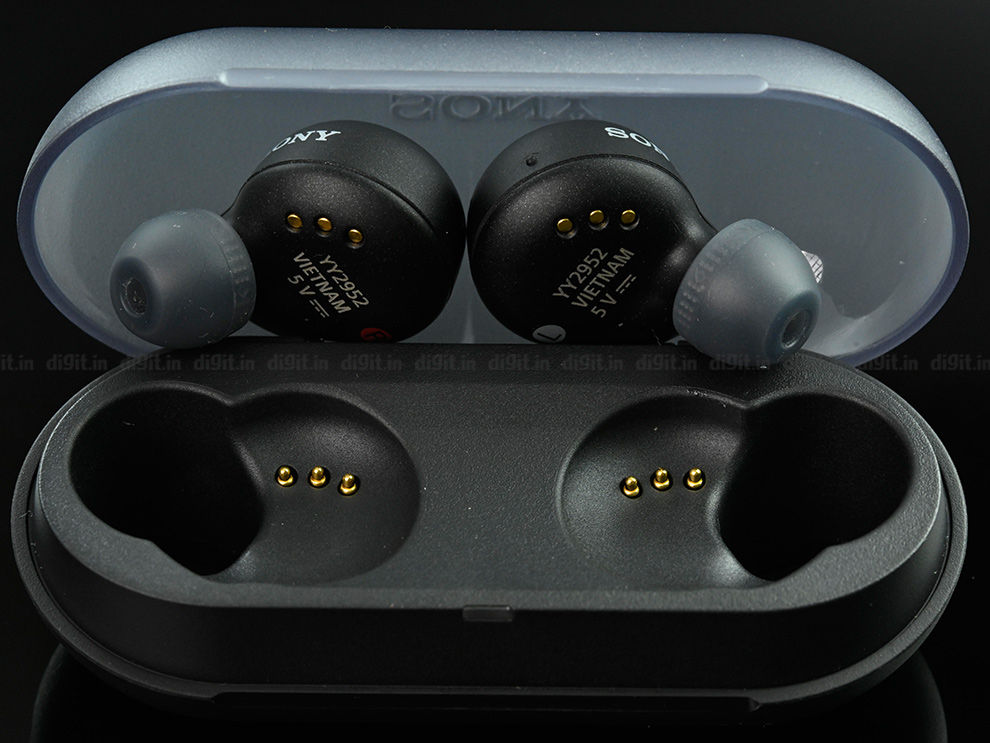 As for the charging case, the Sony WF-C500 has a relatively small pill-shaped case with a translucent top. While the translucent top design can look slightly cheap, it does allow you to peek inside and ascertain the battery levels without having to open up the case. The case is pretty difficult to open one-handed and has a lot of resistance to opening in general, but a small lip on the lid does give you something to grab onto. Inside the case, the earpieces stay in place using strong magnets. While the case does look and feel decent for the price, the Nothing Ear 1 one-ups Sony WF-C500 with its unique transparent design.

One of the best features of the WF-C500 is companion app support. The earphones are compatible with Sony’s Headphone Connect app which allows users some level of control over their earbuds. Available on both Android and iOS, the Headphones Connect app lets users play with customisation options such as an ear scanning feature to customise sound according to your ear, and 360 Reality Audio. Do note though that there are only a couple of apps that support 360 Reality Audio in India so it isn’t a very useful feature. 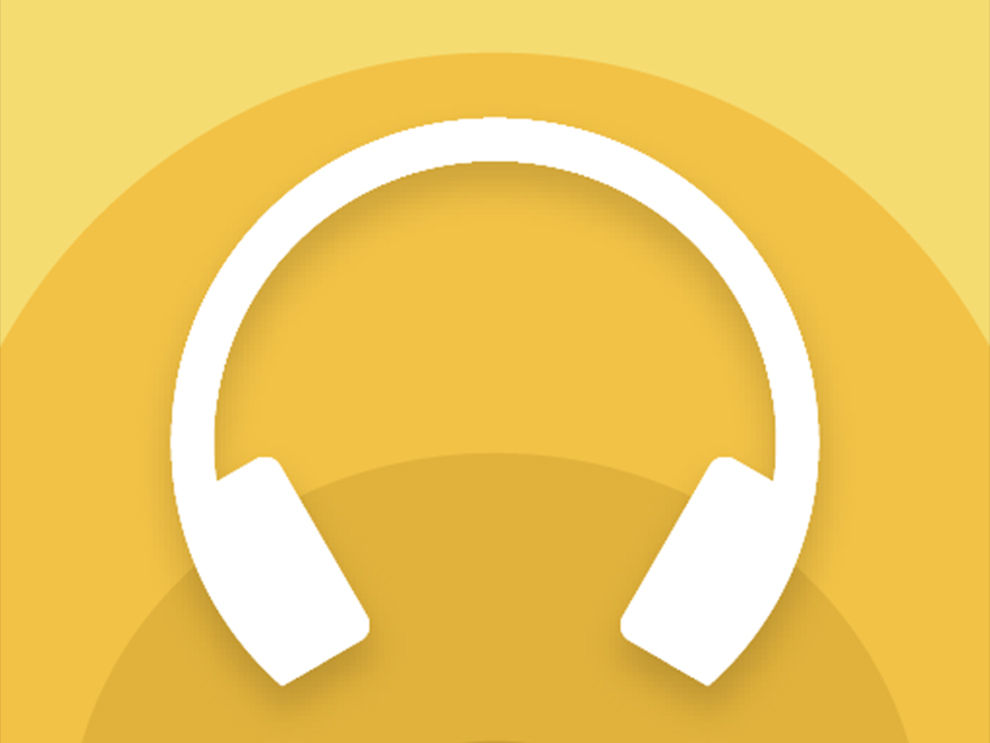 The best feature of the app is definitely the customisable equaliser. It comes with a variety of presets as well as custom sliders for the user to play around with. In contrast, the Nothing Ear 1 app doesn’t have a custom EQ, only a few presets to work with. It does, however, have customisable controls which are absent on these earbuds. We really missed the functionality of custom controls. It’s the granular levels of control an app provides that really amplifies the overall experience, so it’s safe to say that we’re disappointed Sony skipped out on this since more inexpensive competitors like the Realme Buds Air 2 also come with customisable controls via the app.

There’s also an Activity tab within the app that tracks your usage and awards you badges for completing some milestones which seemed pretty gimmicky to us, but you can be the judge. You can also toggle DSEE within the app, choose Bluetooth Connection quality, check battery status and of course, update the firmware. 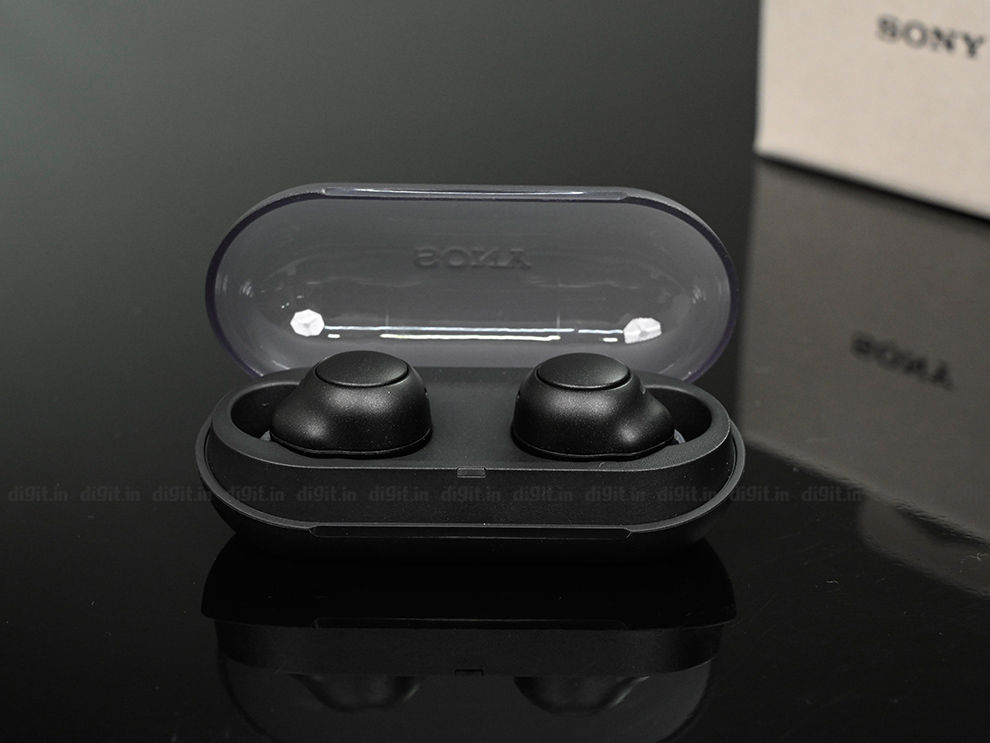 As for other features, the earbuds support mono earbud use, allowing you to use either earbud independently of the other. You can also activate voice assistant by pressing and holding the right earbud. You also get other music and call controls, so pressing the right button once pauses/plays music and accepts or hangs up calls. Pressing the right button twice skips to the next track while pressing it thrice goes back to the previous track. The left earbud controls volume levels – pressing it once raises volume while pressing and holding the button lowers the volume. These aren’t the most intuitive controls we’ve experienced and most users will take some time to memorise them. The earbuds support Google’s Fast Pair as mentioned before, and also have a feature called Swift Pair to quickly pair with Windows 10 PCs. They’re also rated IPX4, as we’ve mentioned before. 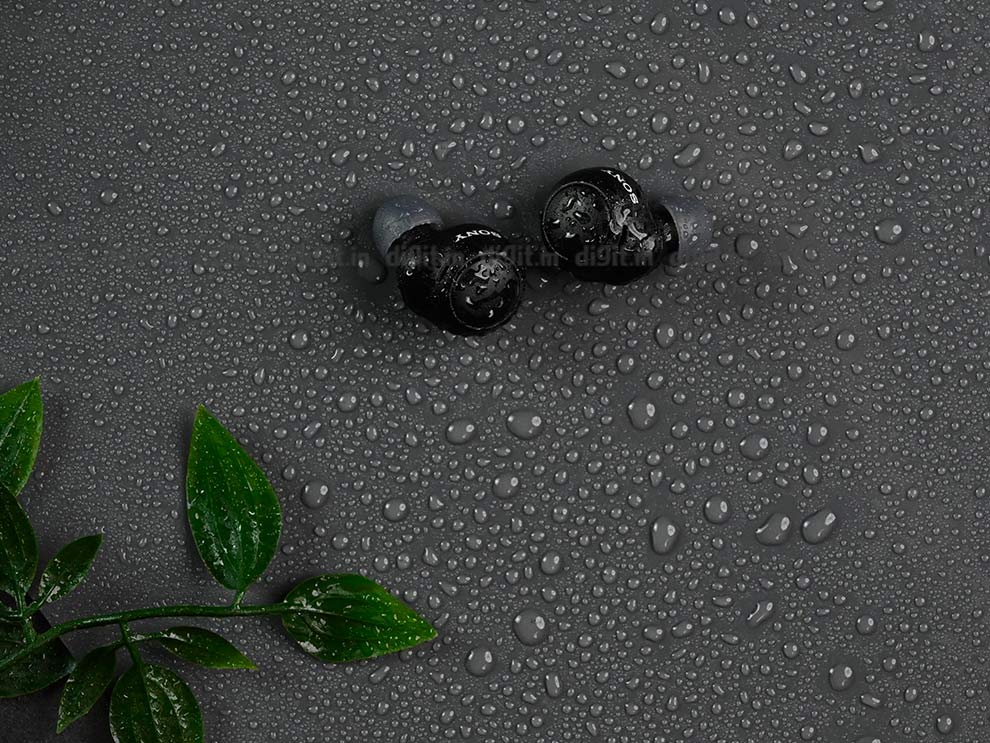 Since these are Sony’s budget TWS earphones, they do miss out on some features such as Active Noise Cancellation, Ambient Sound Mode, and Qi wireless charging. While this is understandable from Sony’s point of view in order to differentiate between their budget and premium offerings, they do fall short when compared to the likes of the Nothing Ear 1 that support all the missing features on these earbuds. So, if you’re looking for the most feature-laden pair of earphones under 6K, the Nothing Ear 1 would be a better bet.

The Sony WF-C500 is Sony’s most inexpensive TWS yet, priced at Rs 5,990. The earphones come packing 5.8mm drivers with a frequency response of 20Hz – 20kHz. In contrast, the most premium TWS from Sony – the WF-1000XM4 comes with 6mm drivers. As for audio codecs, the earphones support SBC and AAC. The earphones also feature Sony’s DSEE (Digital Sound Enhancement Engine) technology which basically upscales compressed audio files by restoring high-range sound that is compromised by the compression process.

This technology coupled with Sony’s prowess in sound tuning results in a pretty balanced sound profile. The earphones may just as well be one of the most detailed-sounding pairs of TWS under 6K. The only other TWS that come close at this price point are the Nothing Ear 1 and the Lypertek PurePlay Z3. We tested these earphones with our specialised equipment to find out the sound signature of the earbuds.

The bass response from 20Hz – 250 Hz is slightly boosted but it doesn’t sound muddy or bloated in the slightest. The mids are surprisingly close to neutral resulting in detailed representation of vocals and lead instruments. The highs from 2kHz to 4kHz see a significant boost, meaning elements such as cymbals and hi-hats are more present in the mix. However, this boost can cause some fatigue when listening over long periods. So, if that does bother you, head over to Sony’s Headphones Connect app to tweak the EQ settings in that region.

As for volume levels, these earphones are capable of getting pretty loud and we suggest that you listen to them around the 50-60 per cent mark. Nevertheless, even if you do raise the volume levels, the sound has minimal distortion, which is impressive. When compared to the Nothing Ear 1, these buds pretty much go toe to toe with them, but one area where they do outshine the Ear 1s is in the high-mids from 500Hz to 1.5kHz. There’s a slight dip in the frequency response graph of the Nothing Ear 1 here which does rob some detail from lead instruments and female vocals.

The Lypertek PurePlay Z3, formerly known as Tevi, does sound a tad more detailed and analytical than the Sony WF-C500, especially in the highs. All being said, these are one of the more technical-sounding earphones under 6K, with excellent imaging and pretty decent soundstage as well.

The Sony WF-C500 is equipped with an omnidirectional microphone on each earbud. The microphones, while not the best for the noisy, outdoor scenarios, perform adeptly indoors. The microphone captures the speaker’s voice and represents it in a clear manner for the most part. The voice can sound slightly thin in comparison to real-life though. Also, the microphone does pick up ambient sounds pretty easily, hence its ineptitude in outdoor locations. Here’s a sample from the mic – We’re using the Sony WF-C500’s microphone to record this in an indoor setting, do let us know your thoughts in the comments section below. 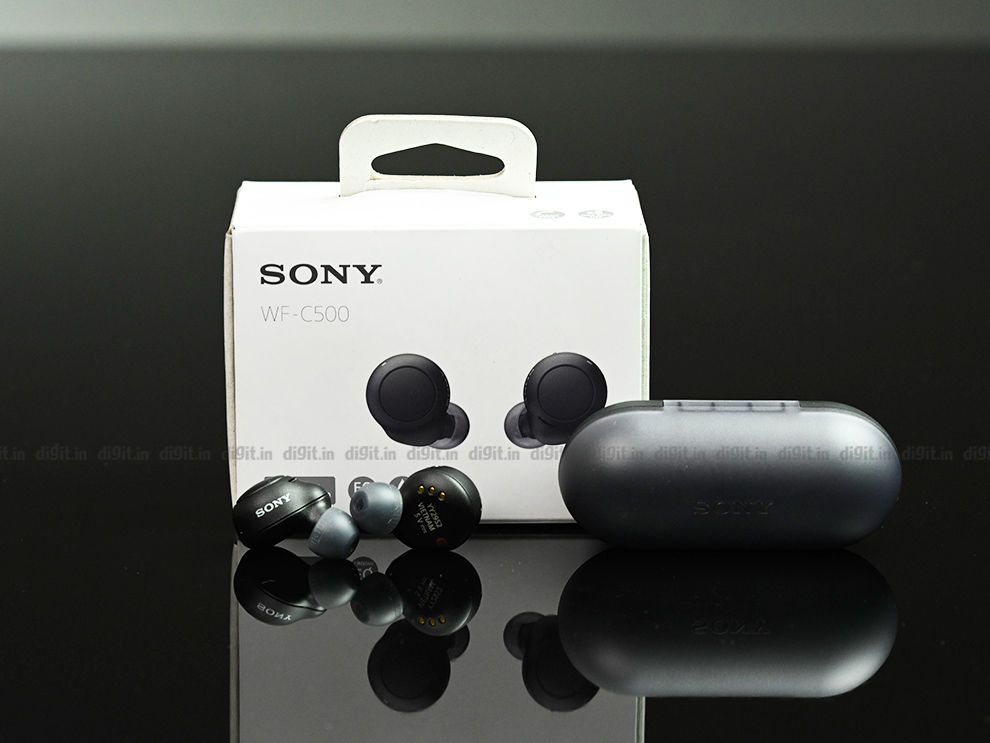 As for wireless connectivity, the earphones are powered by Bluetooth 5.0 and have a pretty solid wireless range. The connection process is seamless with Google’s Fast Pair and even without it, you can pair with a device in no time. Consequent connections are instantaneous with the earphones connecting to the paired device as soon as the buds are pulled out of the charging case. There were no lags or stutters in the connection as well during our testing period. The earphones also have minimal noticeable delay or latency when watching videos or playing games, but the addition of a codec such as aptX or aptX LL would have lowered the latency even further.

Battery life is an extremely important metric for most buyers out there. The WF-C500 fares pretty decently in this regard. The earbuds themselves are rated at 10 hours of wireless playtime which is definitely on the higher end of the spectrum even when compared to premium TWS. However, the charging holds merely one more charge, bringing the total to 20 hours which is nothing extraordinary. 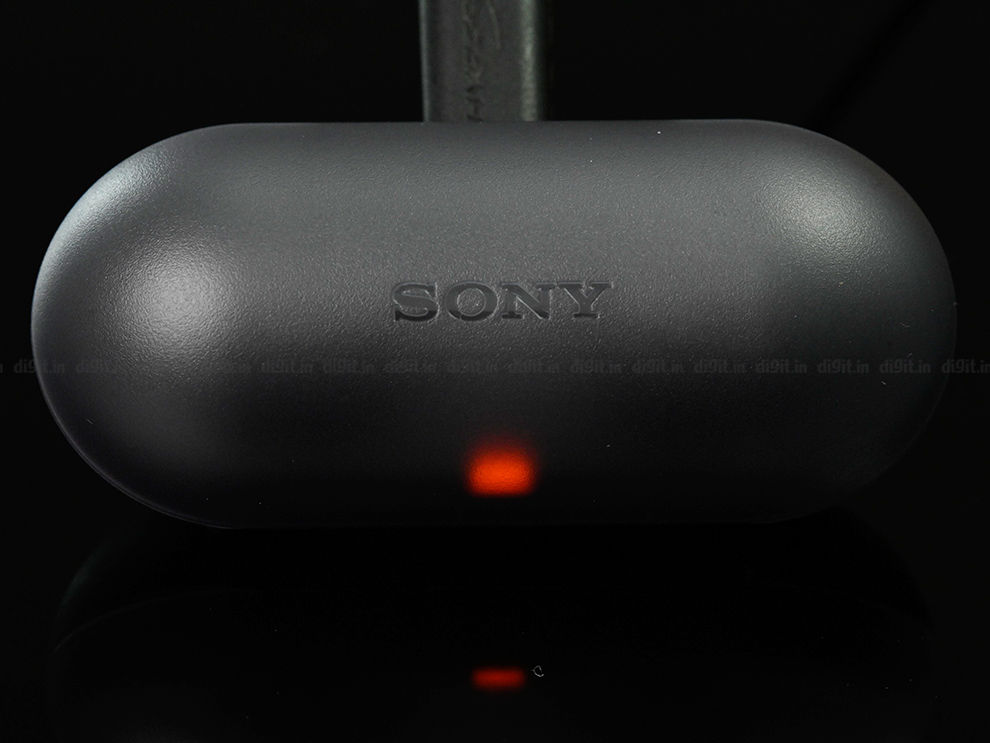 So, while the battery life on the earbuds alone is outstanding, the overall playtime is mediocre. In contrast, the Nothing Ear 1 has 34 hours of total playtime with about 5.5 hours on the buds alone (with ANC turned off).

In our tests, with the volume set to about 60 per cent, we recorded a wireless playtime of 9.5 hours on the earbuds which does nearly stand up to Sony’s claim. We also got one full charge from the case as well. Additionally, the earbuds also support fast charging where merely 10 minutes of charging gives you an hour’s worth of playtime.

So, what’s the answer to the all-important question – should you buy the Sony WF-C500? The answer is a resounding – depends. There are two areas where these earphones clearly shine – sound quality and fit. The earphones have a balanced sonic signature with well-defined and detailed sound. Additionally, the earbuds are comfortable, have a secure fit, and are IPX4 rated making them a handy choice for workouts. However, the earphones do fall short in comparison to competitors in some areas such as total battery life, customisable controls, and transparency mode. These are definitely not one of the more feature-packed pairs of TWS earphones under Rs 6,000. So, if features such as custom controls, ANC and transparency mode are your primary concern, you may be better off looking at other options such as the Nothing Ear 1 and even the cheaper Realme Buds Air 2.